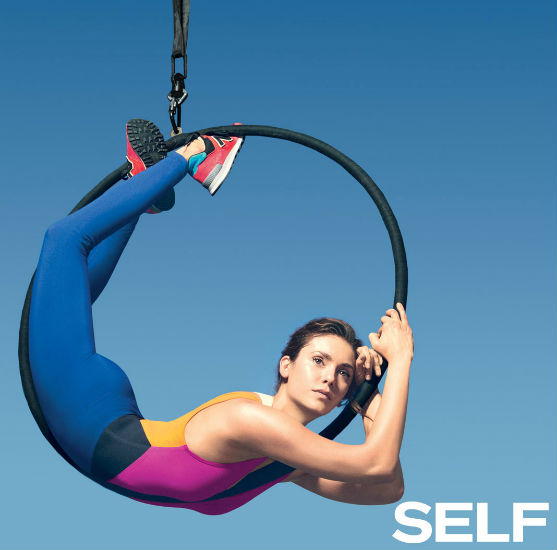 –Nina Dobrev talks about saying goodbye to the Vampire Diaries in her new Self cover story.

–Emilia Clarke met Channing Tatum and Jenna Dewan Tatum at a Golden Globes party and was so taken with them she asked, “Please, can we all have something sexual together? You’re both beautiful, even just a hug.’” Emilia, did we just become best friends?!

–Sofia Vergara might do a reality show? About her career? Airing on Snapchat? Seriously, all of those words exhaust me.

–Sarah Jessica Parker‘s Instagram stirred up Sex and the City sequel rumors — but she was just shopping.

-Of course Mariah Carey‘s Mother’s Day cake was a size 8 butterfly stiletto. I mean, of course.

–Paul Scheer is doing a spoof of MTV TRL and it sounds amazing. Katie Lowes as Britney Spears and Terry Crews as Diddy? Sign me up!

-This bit in the Hollywood Reporter roundtable on writers room diversity offers some fantastic insight into Hollywood, especially when Lee Daniels takes over the interview and starts grilling the other showrunners about how many writers of colour are on their staff. The House of Cards guy who somehow thinks that diversity can be achieved without diversity really digs himself into a hole. For a really smart take on it, look at @kristenwarner’s Twitter feed from last night.

-A (really weak) joke in a Vulture post saying Zac Efron is joining Empire caused the internet to lose all its chill.

-It’s really paying to be a friend of celebrities these days. Katy Perry‘s BFF just released a book — and it’s about BFFs. Your move, Taylor Swift‘s posse!

-I’m seeing a lot of hate for the final half-season of Mad Men on Twitter, but I am so freaking here for it. This week’s was one of my faves.

–Noah Galloway proposed on DWTS last night and it made Demi Moore cry.

–Shonda Rhimes‘ newest ABC show, The Catch, is being held for mid-season which surprises me.

-Meanwhile, here are the trailers for the new Fox fall shows and the new ABC fall shows. I’m most intrigued by The Family starring Joan Allen (and Matt Saracen!)

-Anyone want to see Anne Hathaway battle a giant lizard with her mind? Then this is the movie for you!

-I’m glad I’m not the only one who is totally confused that the Ninja Turtles sequel is kinda making me want to see it.

-These are 10 of the most hotly anticipated movies at this year’s Cannes Film Festival.

–Anna Kendrick was her usual charming self on Ellen today, in which she talks about turning 30 and cutting back on the Taco Bell.