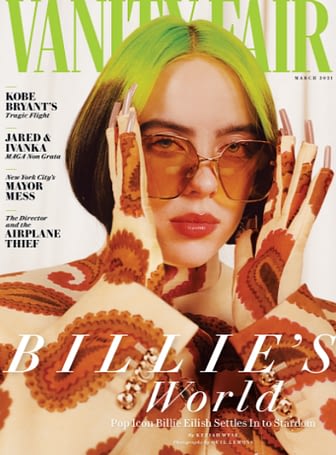 -In her new Vanity Fair cover story, Billie Eilish talks about over-enthusiastic fans (“When you’re excited about something, you forget boundaries and you forget what’s polite and what’s kind of not polite. I’ve had a lot of weird situations—people will kiss me and pick me up, spin me around”), and the intense scrutiny she’s under (“I thought that I would be the only one dealing with my hatred for my body, but I guess the internet also hates my body. So that’s great”).

-To promote Savage X Fenty for Valentine’s Day, Rihanna posted a clip of her dancing in sheer lingerie — and damn if she isn’t making that mullet work for her.

–Kourtney Kardashian and Travis Barker are reportedly dating. They first became friends because their kids hang out together.

–Prince Harry dismissed rumors that he and Meghan Markle were giving up social media for good.

-Variety’s Actors on Actors interviews continue to hit it out of the park. Jamie Dornan and Eddie Redmayne recall their time as roommates, and — in what is the most surprisingly delightful pairing yet — Pete Davidson and Glenn Close talk about keeping movie costumes and her never winning an Oscar. “Is it better to be wheeled out in a wheelchair and get the lifetime achievement award? You don’t have to make a speech…It might be cool to never get one. I wouldn’t mind being wheeled out when I’m old and drooling, and I have a gray wig to cover my bald head.”

-This story about how power players in entertainment and media are hustling hard to get the vaccine before they’re supposed to is so deeply unsurprising.

–Demi Lovato is going back to her comedy roots. She’s signed on to a new sitcom for NBC called Hungry.

–This photo of Ben Affleck juggling all the online orders he placed in a pandemic haze is way too relatable.

-Ugh. As someone who works in social media, this is my worst nightmare: Jennifer Lopez tried to make her ‘Love Don’t Cost a Thing’ challenge go viral, and it flopped — mostly because we were all too busy creating Bernie memes. Plus, strolling on a beach and throwing away expensive things? In this climate??

–Jodie Turner-Smith will play the role of Éile in a prequel to the hit Netflix series The Witcher. Yes, cast her in all things!

–Ellen DeGeneres has one more year left on the contract for her show and negotiations for what happens next will reportedly begin next month, with Kelly Clarkson nipping at her heels.

-My god, the second Euphoria special is somehow even better than the first. I’m enjoying these slowed down, character-driven episodes more than I ever liked the show.

-Meanwhile, ABC has delayed the return of Grey’s Anatomy, Station 19, and A Million Little Things to March.

-I’ve previously only read a few historical romances but I was shocked by how dated Bridgerton seemed when I started reading the series before it debuted on Netflix. If those books are what people think romance novels are like, we’re in trouble. This piece nails it: “Yes, romance is having a moment, but it’s bittersweet for the most popular representation of our genre to be based on a series of books from two decades ago.” This list of Regency recommendations seems like a better reflection of what’s happening in the genre now.

–Andy Samberg just released a commentary track for Palm Springs on Hulu. I’m actually surprised it took this long for streamers to get into DVD-style extras. I want blooper reels on everything!

-People are losing their minds over the Godzilla vs. Kong trailer. Sure.

Reese Witherspoon Is An Influencer

Prince Harry & Meghan Markle Rumoured to Be Honeymooning in Canada