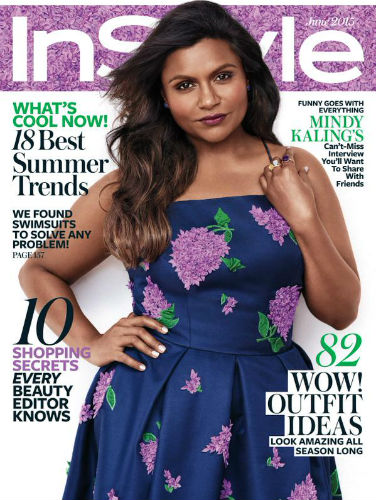 –Mindy Kaling looks lovely on the cover of InStyle, in which she talks about her relationship with BJ Novak (“romantically charged camaraderie with loud arguments”) and why she wants kids but maybe not marriage.

–Anna Kendrick dropped some f-bombs on the Pitch Perfect 2 red carpet, managed to make it adorable.

-God bless The Washington Post for delving deep into the mysterious situation that had two primary Good Wife characters not sharing any scenes for years. I really, really liked Dan Fienberg’s quote in that piece about how manipulative and insulting to the audience Julianna Margulies and Archie Panjabi‘s fake scenes together these past two episodes have been. (And we’re all assuming last night’s was green-screened, right?) I was texting back and forth with Nicole last night during the show and was so angry that the writers expected us to suddenly care about their friendship when they haven’t been on screen together in 50+ eps. Hard pass!

-In any case, critics are tearing apart last night’s season finale. On-set tension or not, that was just bad. And yet, CBS just renewed it.

-Actually CBS basically renewed everything — except for Battle Creek and the terrible, terrible Stalker.

-Over on Fox, they announced The X Files revival will premiere in January 2016, American Idol is ending, and Empire has added Chris Rock, Lenny Kravitz and Alicia Keys. Also, Sleepy Hollow is going up against Shondaland on Thursday nights so colour it screwed.

-Meanwhile, NBC unveiled its fall lineup and it’s … not good. Blindspot may have potential, and critics seemed to enjoy the sizzle reels of Eva Longoria‘s Hot and Bothered, and Megan Mullally’s You, Me and the End of the World, but there’s not a lot of buzz for the others. And seriously, how is a “frazzled lady professional” show like Heartbreaker still getting made in 2015?!

–Amy Schumer‘s latest skit is about men who want to have sex with beer.

-Are Jake Gyllenhaal and Ruth Wilson still on? Or is he with Rachel McAdams? Don’t fail me, internet!

-Here’s the new Orange Is the New Black trailer.

–Henry Cavill is a walking PSA for why stars need stylists.

–James McAvoy shaved off his hair. His beautiful, beautiful hair.

-Critics are loving the new Mad Max movie, which is currently at 100% on Rotten Tomatoes.

-Here’s the trailer for Unexpected starring Cobie Smulders, which got great buzz at Sundance.

Rihanna Covers Up for Glamour