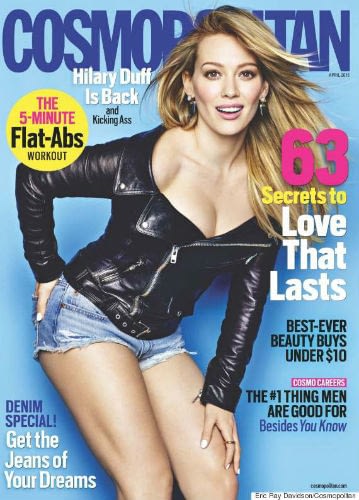 –Hilary Duff graces the new issue of Cosmo (in one of the most awkward cover photo poses I’ve seen in a while). She talks about marrying too young and not wanting to sound bitter about her divorce. Let’s see if she can maintain that attitude amid all these rumours that she split from Mike Comrie because he allegedly tried to pay another woman for sex.

-Man, I miss Michelle Williams. She looks amazing in the new issue of Elle UK. Dammit, now I want grey hair. (And not just the stray ones I swear about…)

-Speaking of celebs I adore, Kelly Clarkson was a bundle of cuteness while singing duets with Jimmy Fallon last night.

-In another fun Fallon skit, Ryan Reynolds and his terrible new haircut played Egg Roulette. He also stayed mum on his baby’s name cause, you know, he doesn’t have a movie to promote yet.

-Also on Fallon, Terrence Howard tried to explain his disastrous appearance at the Oscars. I just can’t with this guy.

-The new trailer for Community season 6 has landed. The good news is that Keith David from Enlisted is perfect. The bad news: it looks like this won’t be legally streaming in Canada. Way to Britta it, Canada!

-As someone who spends a lot of time in her day job looking up dumb stock photos, this marketing campaign for Vince Vaughn‘s new movie is the best. I’m going to sneak these into a lot of client presentations…

-The Wonder Years’ Fred Savage (who is now an in-demand TV director) will play Rob Lowe‘s brother in a new show called Grinder. Sadly, it’s not about what you think it is.

–Justin Bieber has now resorted to begging Seth Rogen to mock him at his Comedy Central roast.

–Anna Kendrick was having a great time live-tweeting last night’s Bachelor — until human pinkie ring Spencer Pratt favourited one of her tweets and sent her down a dark spiral.

-The Killing’s’ Mireille Enos just landed the lead role in Shonda Rhimes’ next series, which sounds like the TV version of Gone Girl.

-If you missed the surprisingly high-rated debut of The Last Man On Earth, Fox is re-running it Saturday. But after reading Mo Ryan’s review, I’m not sure I want to catch up on this one. She seems to be the only critic who didn’t like it, but her mention of the nagging wife trope hits my sore spot.

-You’re The Worst star Aya Cash teases the next season. Can. Not. Wait.

-I finally got around to watching Fifty Shades of Grey last night. (Actually, I only made it through the first hour. My tolerance for abusive stalkers who tell women how to dress even when they’re not together is pretty damn low). Still, I enjoyed this cut SNL parody a million times more than the actual movie.

–Justin Timberlake threw Jessica Biel a bone for her birthday and posted a photo on Instagram that actually showed her face. A true gentleman!

-Here’s what Joseph Gordon-Levitt looks like as Edward Snowden.

-According to People, Robert Pattinson and FKA twigs are both wearing “promise rings.”

-Not since Felicity Porter has a haircut caused such an uproar. Jared Leto cut his off for the Suicide Squad movie. Later, man-bun.

-Here’s the first trailer for iZombie, which premieres March 17. I saw the first episode and really liked it. Listen to that voice over and tell me it’s not Veronica Mars-esque! Just with, you know, more brain talk.