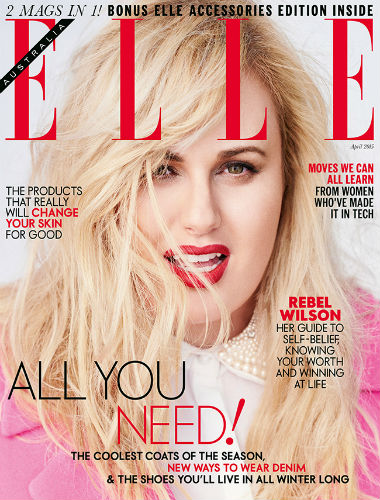 –Rebel Wilson is not one of those comedians who has to be “on” all the time. She tells Elle Australia she would go “psycho” if she constantly tried to be funny.

-Netflix drops the new Kyle Chandler show Bloodlines tonight. The performances are getting rave reviews. The show itself? Not so much.

-First, Eva Mendes took away our fake boyfriend. Now she’s trying to take away our sweatpants.

-Holy crap, Us Weekly just coughed up a full retraction of their story about Kendall Jenner reaction to Bruce Jenner‘s transition. You don’t see that everyday.

–Jessica Lange is no longer going to be on American Horror Story, but she had no problem throwing tons of shade at Lady Gaga‘s casting news.

-Cripes, True Detective! I’m really trying to give season 2 the benefit of the doubt, but you’re already making it so. damn. hard.

-Not surprisingly, Tom Cruise and Katie Holmes are no longer super tight BFFs who enjoy braiding each other’s hair and texting about Scandal.

-When I first heard they were remaking Little Women I thought it was a terrible idea, but I’ve totally 180’d after learning it’s in Sarah Polley’s hands.

–Michael Buble admits he was a “jerk” to his exes. As someone who was covering celebrity gossip fulltime during his jerkiness heyday, he’s not wrong. (Though I did take perverse pleasure in regaling my mother with all the gross stories I was hearing about him at the time…)

-This trailer for Fox’s upcoming Wayward Pines looks truly terrifying. (Although it stars Terrence Howard so I’m giving it a hard pass.)

-Speaking of shows I refuse to watch because of Mr. “Women Are Unclean,” last night’s season finale of Empire blew everything else away. After 10 weeks of growth(!), it drew 16.7 million viewers(!!) and surpassed Big Bang Theory as broadcast’s top-rated show. Bananas.

-Another day, another TV show oral history — this one on Mad Men. (Did you know Christina Hendricks‘ agent dropped her for doing the show?)

–Joseph Gordon-Levitt will produce and star in a Fraggle Rock movie. Your move, Jason Segel.

-Another great article on how The CW is changing the future of TV. Now that the The Good Wife has been circling the toilet the last few episodes, the only dramas I catch on the regular seem to be on the CW, which is crazy. But from the surprisingly feminist The 100 to the emotional rollercoaster that was this week’s Flash, they’re killing it.

-This new TV spot is my favorite trailer yet for Avengers: Age of Ultron. It’s got that trademark Joss Whedon sass.

-Here’s the first trailer for Paper Towns, the latest adaptation from YA author (and my YouTube hero) John Green. I’m still not convinced that Cara Delevingne is anything more than walking eyebrows but damn, this looks like my jam.