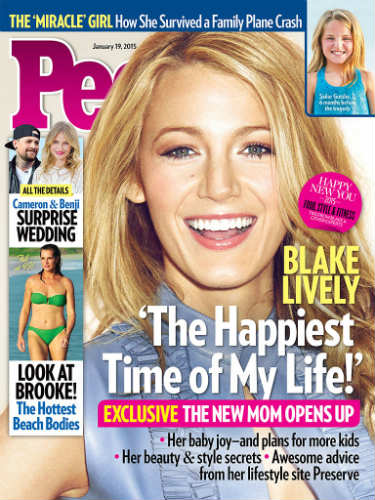 –Blake Lively just gave birth 0.04 seconds ago, and already has a People cover story about what it’s like being a mom. Say what you will about her, but girlfriend’s got game.

-I don’t know if I’ve ever liked Nicole Kidman as much as I did while watching her make Jimmy Fallon squirm on his show last night, when she recalled the time she went to his apartment — but he didn’t realize it was a date. I love how she refuses to let him off the hook. “You wore sweatpants!”

-They also played Box of Lies. I’m impressed by how expressive her face is in this.

–Gugu Mbatha-Raw is going to play Matthew McConaughey’s wife in a new movie, which will hopefully make her the huge star she deserves to be.

-I want to go to Allison Janney’s parties now.

-Well, I no longer think Benedict Cumberbatch‘s engagement was part of his campaign. He and his fiance are expecting a cumberbaby.

-Speaking of awards campaigning, The Hollywood Reporter has a good article on actors who are on Broadway, overseas or otherwise too occupied to play the game. (Jennifer Aniston clearly doesn’t have this problem.)

-Meanwhile, Aniston says she’s afraid of the ocean. But I thought she liked screaming at it?

-This is troubling: Agent Carter’s ratings were good, but not great. Premieres tend to get big numbers and subsequent eps drop off from there. This is a tougher starting point.

–Tina Fey and Amy Poehler discuss their unique approach to hosting the Golden Globes. “God as my witness, I’m not going to dope beforehand. I’m gonna do this one clean.”

-First, we learned that Channing Tatum writes emails exactly like you’d hoped he would. Now we learn that his YouTube playlist is exactly what you’d hoped it would be.

-Well, this is disappointing. Phylicia Rashad spoke out about the allegations against Bill Cosby, defending her TV husband and saying “forget these women.” #byefelicia

–George Clooney’s 1990s movie-business dramedy that he’ll produce (and maybe even appear on!) has landed at Showtime.

–Ethan Hawke plays a drone pilot who questions the ethics of his job in the new Good Kill trailer.

Melissa McCarthy Gets Trimmed in The Heat Poster