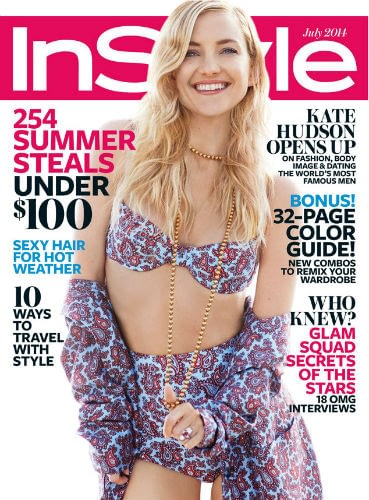 –Kate Hudson poses in a bikini on the new cover of InStyle, but though she wants you to look at her body, she doesn’t want you to question it. In the interview, she says her biggest pet peeve is  rampant plastic surgery speculation. “That’s like asking someone if they see a therapist.”  No, it’s really not.

–Gwyneth Paltrow and Chris Martin continue to prove that not all Hollywood splits have to be brutal. They were photographed having a cosy dinner together again this weekend.

–Taye Diggs opens up on his split from Idina Menzel in the new issue of Redbook, saying: “I’d be lying if I said there weren’t times when I thought, ‘Oh, man, people are going to trip out…It was easy for people to root for us.”

-It wasn’t all good news for Sandra this weekend. A man obsessed with her broke into her house while she was asleep.

–Rachel McAdams and Jake Gyllenhaal were spotted at the same place again. It’s probably because they’re both researching a movie, but everyone is still hoping it turns into more.

–Lil Kim had her first child, and the name she’s saddled the kid with is a doozy: Royal Reign.

-It’s only Monday, and already Rosario Dawson has won the title of Worst Outfit of the Week.

–This Slate article about how adults should be embarrassed to read YA is total bullshit.

-Speaking of YA, The Fault In Our Stars killed at the box office this weekend. It’s No 1 and Maleficent is No 2, which means that girls are running the world right now.

–Shailene Woodley adopted a really terrible disguise to sneak into a theatre with her costar undetected.

-Like everyone else in the world, Shailene cried at a premiere of TFIOS.  Thank gawd I ended up at one of the few theatres in Toronto that’s licensed. I had two rye & gingers and still barely got through the last 1/2 hour.

-Also, this interview with the parents of the girl the book/movie is based on killed me. KILLED.

-Speaking of TFIOS, is the character of Augustus Waters just a boy version of the Manic Pixie Dream Girl? Maybe, but this video of the actor breakdancing will make me forgive him for anything.

-Everyone is assuming that this shirt Brad Pitt wore features a picture of him and Angelina Jolie holding hands. Um, if you say so.

-Last night at the Tonys, Neil Patrick Harris went in drag as his Hedwig character and got all up on Orlando Bloom and Sting, while host Hugh Jackman got all bouncy in an incredibly athletic intro before joining TI and LL Cool J for a rap version of The Music Man.

–Chris O’Dowd had the best reaction to not winning his Tony category.

–Adam Brody and Leighton Meester posed together on a red carpet for the first time since getting married.

–Leighton‘s former costar Penn Badgley performed with his band Mother recently, and he introduced himself by saying “I am Gossip Girl.” Love it!

-Next time you get the urge to chop off all your hair, just look at this photo of Penelope Cruz with a pixie cut.

–This photo of Jessica Chastain, however, is totally going to make you want bangs.

-According to her sister, Hilary Duff and Mike Comrie are back on solid ground.

-Will being baptized in a bathtub wash away a major PR crisis? Justin Bieber sure hopes so.

-There’s a great oral history of The Mighty Ducks in Time magazine, and Joshua Jackson mentioned he’d be open to doing a fourth. Don’t tease me!

-Speaking of oral histories, here’s one about the comedy group The Groundlings, in which Kathy Griffin talks about prank calling J.J. Abrams when he was a receptionist.

–Mark Ruffalo showed off his mad unicycling skills on The Graham Norton Show.

-A new trailer for The Leftovers deals with the chaos left by unanswered questions.

-Here’s the new teaser trailer for Love, Rosie, which is based on I book I really liked called Rosie Dunne by Cecilia Ahern.