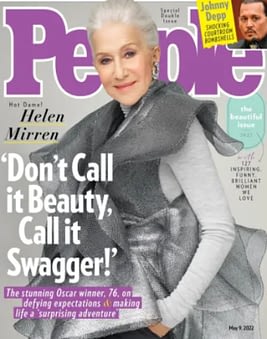 –Helen Mirren graces the cover of People’s Beautiful issue. “Don’t get me wrong — I love beauty and I love looking at beautiful things. But I don’t like the word beauty [as it’s] associated with the beauty industry—makeup and products, skin care and all the rest of it — because I think it excludes the vast majority of us who are not beautiful…I think what is called the beauty industry should be called the swagger industry. We’re giving people swagger.”

-Wait, wait, wait — did Jason Sudeikis have Olivia Wilde served with legal papers about custody in the middle of her onstage CinemaCon presentation yesterday?

-At yesterday’s CinemaCon presentation for theatre owners, the first footage of Timothée Chalamet singing a song from Wonka was shown, as well as a scene of Harry Styles and Florence Pugh in bed in Don’t Worry Darling, and Michael Keaton‘s appearance in The Flash movie.

-They also screened footage for David O. Russell‘s Amsterdam, in which Taylor Swift plays a mourning daughter, breaking down into tears before her father’s body as Chris Rock looks on.

-Warner Bros and DC announced that The Batman is officially getting a sequel, with Robert Pattinson and Matt Reeves both set to return.

–Kim Kardashian‘s photoshopping is out of control. After winning the bellybutton photo war, she took to her stories to admit that she has photoshopped in the past (ya don’t say!) and pointed out this wildly crazy example in which she photoshopped Kylie’s daughter Stormi’s head onto Khloe’s daughter True’s body for the sake of her grid “aesthetic.”

-Meanwhile, Pete Davidson just landing a Peacock comedy based on his life story.

-Director Justin Lin has left the latest Fast/Furious movie, Fast X. This is huge news, especially because it had already started filming. Lin had previously directed five Fast movies, but left this one over “creative differences.”

-The Walking Dead was working on a spin-off anchored by fan-favourite characters Carol (Melissa McBride) and Daryl (Norman Reedus), but McBride just dropped out. AMC said in a statement, “Relocating to Europe became logistically untenable for Melissa at this time.”

-I love that Alexander Skarsgård and 30 Rock’s Jack McBrayer are unlikely BFFs.

-The 365 Days sequel dropped on Netflix today and it feels like no one is talking about it. Which is weird because the first movie (though objectively horrible) was a HUGE international hit.

-This is the best deep-dive I’ve read about Netflix’s current woes, which includes quotes from top creators and insiders talking about how the streaming giant pitted two female executives against each other.

–Lady Gaga announced she will release a new song for Top Gun: Maverick. Which is great and all, but I’d love to hear how she’d cover “Danger Zone.”

-The Spring Awakening documentary seems packed full of odd tidbits about Lea Michele and Jonathan Groff‘s relationship. In the doc, she says, “I was so in love with him Finally, I cornered him at a party, and I said to him, ‘Why don’t you love me? Just love me. Why can’t you love me? Date me. Love me.’ And I just saw this look in his eyes, and in that moment, I knew.” (I love the implication that the only possible reason he wouldn’t want to date her is because he’s gay.)

-This is an interesting look at how the entire internet seems to be behind Johnny Depp right now, even though he’s not doing well in court.

-Now that Andrew Garfield’s new TV series is about to drop, he says he’s taking a break from acting. “I need to recalibrate and reconsider what I want to do next and who I want to be and just be a bit of a person for awhile. Because as you know, that is a washing machine, that awards season. I need to just be a bit ordinary for a while.”

-Wolf Like Me, a Peacock show starring Isla Fisher and Josh Gad that I’ve heard absolutely zero buzz for, has been renewed.

–Jerrod Carmichael and Christopher Abbott make a pact to end their lives in the trailer for On The Count Of Three.

Prince Harry & Meghan Markle Rumoured to Be Honeymooning in Canada