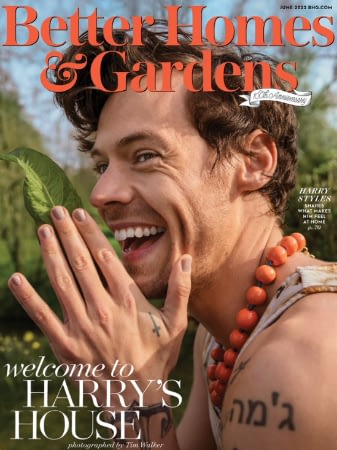 –Harry Styles is everywhere lately. And when I say “everywhere,” I’m including on the cover of…<checks notes>…Better Homes & Gardens. Despite the unlikely source, the interview is quite good. He talks about reputation for being nice (“My producer keeps asking me when I’m going to have my big breakdown. The most honest version I can think of is, I didn’t grow up in poverty by any means, but we didn’t have much money, and I had an expectation of what I could achieve in life. I feel like everything else has been a bonus, and I am so lucky”), and how it felt to finally sign a music contract that didn’t have a decency clause (“I felt free…For a long time, it felt like the only thing that was mine was my sex life. I felt so ashamed about it, ashamed at the idea of people even knowing that I was having sex, let alone who with”).

–Josh Charles was interviewed in Esquire and when asked “What is it like to get a fresh Aaron Sorkin television script?” he answered “Eh.” When pressed, he said, “To be frank with you, other writers that I’ve worked with, I’m much more excited about opening up their scripts.” That’s the bit that’s probably going to be soundbite’d all over the place today but it’s worth reading the whole interview because he really puts a lot of thought into his response, even bringing it back up after the interviewer had moved on (“I feel like I really let you down with my Aaron answer, because you’re obviously a huge fan”) and trying to unpack why he answered that way (“I’m trying to be as respectful as I can, and I appreciate his talent. I really do. But I also feel like there’s enough people that think he’s the second coming of Jesus Christ, you know? His self probably included. But you asked me a question and I wanted to give you an honest answer”).

–Johnny Depp ended his testimony, and next up it’s Amber Heard‘s turn. Despite what Twitter would have you believe, it’s gone really, really badly for him — and that’s before she’s even given her testimony.

–Viola Davis responded to criticism of her performance as Michelle Obama in The First Lady, saying “It’s incredibly hurtful when people say negative things about your work. How do you move on from the hurt and failure? But you have to. Not everything is going to be awards-worthy.” She added, “Critics absolutely serve no purpose. And I’m not saying that to be nasty, either.” (Though it doesn’t sound like she was talking about professional critics, but social media trolls.)

-Supernatural star Misha Collins says he didn’t actually come out as bisexual, and apologized for “the clumsiness of my language“. I mean, he was at a fan event and literally said, “By a show of force, how many of you would consider yourselves introverts? How many extroverts? And how many bisexuals? I’m all three” so I’m not sure how that could be misconstrued, but ok. Not great for someone from a show that has been consistently accused of queerbaiting. This was my favourite comment: “at this point if i were your publicist instead of an apology i’d advise just trying gay sex and seeing if maybe you can roll with it.”

-I’m going to hold off on watching last night’s Better Things finale because that show has been such a soul balm that I’m not ready for it to end. But this journalist’s heartwarming Pamela Adlon story feels so true to what the show and the actress/creator is all about.

–Jon M. Chu’s film adaptation of Wicked will be split into two movies, set for releases in 2024 and 2025. I mean, the Broadway musical is 2 hours and 40 mins long so I’m not sure why this is necessary.

–Megan Fox clarified that she and Machine Gun Kelly “consume each other’s blood on occasion for ritual purposes only.” God, I love how hard they’re committing to this bit.

–Sarah Jessica Parker reviewed her most memorable Met Gala looks for Vogue, and proved she has always understood the assignment. You can’t watch this video without being impressed by her knowledge of fashion history.

–Kelly Clarkson covering Radiohead was exactly what I needed today.

–Bill Hader told Jimmy Kimmel about a brutal prank his daughter pulled on him in front of Chris Pratt.

–Sienna Miller says being in a relationship with Jude Law when she was working with Harvey Weinstein likely protected her. “I was Jude’s girlfriend, and there was probably protection in that. Jude was a big actor for Harvey. I called Harvey ‘Pops’ from day one, which I’m sure helped; you’re not going to wank on that.”

–Elisabeth Moss is getting raves for her performance in the new show Shining Girls.

-TikTok star Charli D’Amelio has been cast in Ryan Kavanaugh‘s supernatural thriller Home School, which is being eyed as the first in an eight(!) film franchise.

-Deborah and Ava hit the road in the trailer for season two of Hacks.

–Claire Danes and Tom Hiddleston star in the trailer for Apple TV+’s mythic monster limited series, The Essex Serpent. I’m all in on this.