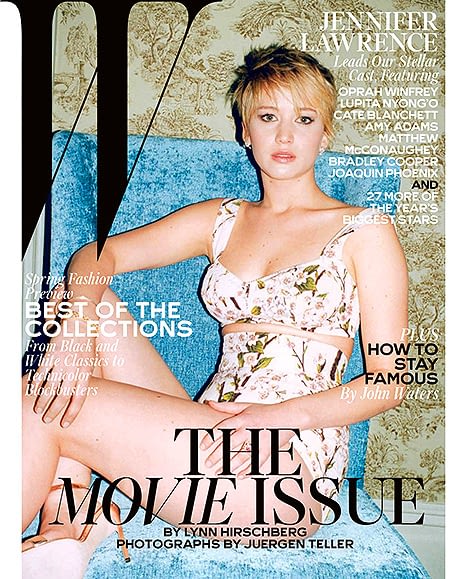 -W magazine released six covers in honour of possible Oscar nominees. I like Jennifer Lawrence‘s the best, while Amy Adams and Cate Blanchett are tied for the worst. The inside photos of the other actors (there were 32 featured in all) also feature some great shots of Emma Thompson, Julie Delpy and Brie Larson.

–Sarah Michelle Gellar is teaching Elmo the meaning of “disappointment” on Sesame Street. She should have just shown him an episode of Ringer.

-Congrats to Lily Tomlin, who wed her partner of 42(!) years.

-I always assumed Amy Poehler would be an easy interview, but she is not taking any shit from The Hollywood Reporter.

-Meanwhile, use whatever VPN blocker you need to in order to watch this Buzzfeed exclusive video on Parks & Recreation’s 100th episode.

–Idris Elba hates it when you talk about rumours of him becoming the first black Bond. “We don’t say ‘White Bond’, we just say ‘Bond’, so it suddenly becomes a black man and he’s a ‘Black Bond’. So I hate that phrase.” Sing it, pretend boyfriend!

-Enough, Kaley Cuoco. You use to be an innocuous sitcom actor, and now you’re everywhere. No, I don’t want to see your wedding video.

–Evander Holyfield made an ass of himself of Celebrity Big Brother UK by spewing some hateful comments about gay people. I love that his costar was actively trying to get him to stop embarrassing himself. (I also love the verbal smackdown from his producers.)

–Michael Bay‘s teleprompter failed during his CES presentation yesterday, and he didn’t handle it well.

-Not only is Shia LeBeouf a jerk, he also smells bad.

-I’m impressed that even publications as celeb-friendly as People aren’t glossing over Emma Roberts’ violent history with her new fiancee.

–Coeur de Pirate‘s cover of Patrick Watson‘s “Great Escape” is basically the only thing getting me through this hellish weather. Stream her new album now on CBC.

-Everytime I see a photo of Cara Delevingne I think, “Her? Really??” It’s even worse when she’s sitting next to the perfection that is Rihanna.

–Sasheer Zamata sounds like she’ll be an awesome addition to SNL, but everyone’s still chafed about how that casting went down.

-I probably shouldn’t admit how amused I am by this parody Twitter account of fake conversations between Kendall Jenner and Harry Styles.

–Jay-Z brought a 12-year-old rapper on stage in North Carolina — and the kid killed it.

–Eva Longoria is Maxim’s woman of the year? Did she even work in 2013?

–Emma Watson and her boyfriend broke up months ago but no one knew because she awesomely keeps her shit locked down.

–This article asks “Has Kim Kardashian been doctoring her belfies?” First of all, I don’t think Photoshop works like that. Secondly, what the hell is a ‘belfie’?

-People are making fun of the fact that Kit Harington has the same expression in every photo at one event, but I’m just proud that he finally closed his mouth!

-ABC Family has ordered the Tori Spelling and Jennie Garth detective show, which makes me stupidly happy for reasons I can’t quite explain.

–Liza Minnelli told Matthew McConaughey that if he doesn’t win an Oscar, she’ll give him hers.

–Jake Gyllenhaal may have split from Alyssa Miller. I attended a Q&A with him last weekend, where I found him totally charming (though my friend had the opposite reaction).

-I would have never pegged chick-lit author Jennifer Weiner as a anti-sexism campaigner, but she’s proving me wrong.

-The Brightest Star trailer is making me almost sorta kinda like Piz. What?!?

Charlize Theron Says Being Unmarried Is “Innately My Truth”