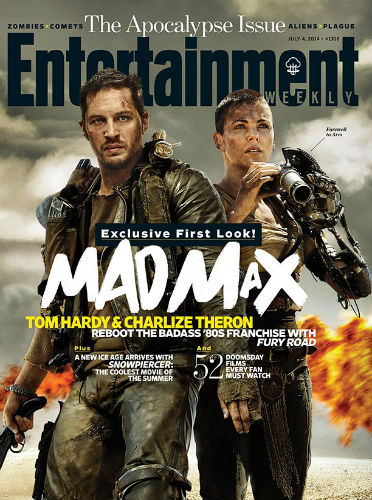 -When I said I wanted to see a dirty photo of Tom Hardy, this isn’t exactly what I had in mind. Also, is this movie trying to ruin Nicholas Hoult for me?!

-Supermodel Cara Delevingne fell asleep multiple times during her interview with Vogue (because that’s totally what healthy, functioning adults do, right?!?), and then angrily tweeted about it.

–Keira Knightley proves she can sing in the latest preview from her new movie, Begin Again. (And yes, I’m going to keep pimping this film until it comes out because I loved it. You’ll love it too. Trust.)

–Joel McHale has a thing for knives.

-Is Sarah Jessica Parker heading back to TV? I hope so; I miss her!

–Solange Knowles rang in her 28th birthday in Jamaica with her 51-year-old boyfriend. On the plus side, no elevator fights!

–Brad Pitt goes to war in the brutal new trailer for Fury. I love that Shia LaBeouf barely gets a line in, while Logan Lerman steals the show.

–Rob Lowe and his wife had to be rescued after “horrific flooding” hit the village they were in while vacationing in France.

–Madonna wore a black niqab veil because it’s “that kind of day.” Don’t bother complaining about it either; she captioned the photo #unapologeticbitch

-Meanwhile, Lourdes Leon will be attending the University of Michigan this fall, just like her mama.

-Here’s proof that Paul Rudd never, ever ages. He clearly has a creepy enchanted portrait stashed in his attic.

–Eli Wallach (aka the best thing about that stupid Kate Winslet/Cameron Diaz movie The Holiday) has died at the age of 98.

-Also sad: Survivor contestant Caleb Bankston has died at the age of 26 in a terrible train derailment.

-Here’s the first teaser trailer for the new season of Downton Abbey, if people still care about that sort of thing.

–Justin Bieber got into another accident while trying to avoid the paparazzi.

-Of course Tom Cruise goes to a pub in London and orders wine instead of a pint. Like, really.

-The first teaser trailer for Hunger Games: Mockingjay, Part 1 has landed. Is it supposed to look like an Apple ad?