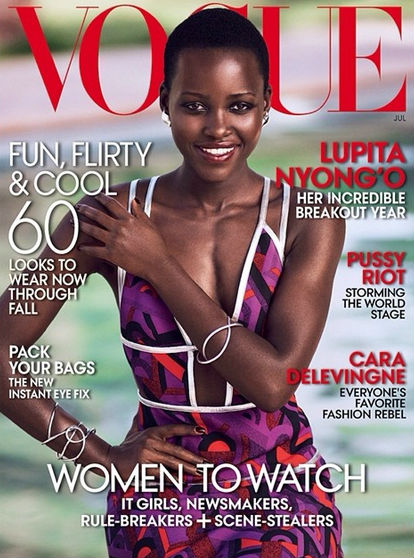 -Love this! Lupita Nyong’o is on the cover of Vogue and she looks as stunning as usual.

-In other stalker news, one of the stars of Pretty Little Liars had to get a restraining order against a security guard who worked on her TV studio lot. Um, did we just uncover A?

–Maggie Gyllenhaal is an Honourable Woman in the first trailer for her Sundance limited series.

–Miley Cyrus send a sweet video message to a sick fan just before she passed away.

-Who do we think the subjects are of this blind item? My bet for No 2 is Lea Michele, but No 1 is tougher. Diane Keaton? Alyssa Milano?

–Idina Menzel’s boob popped out of her dress during a live performance but she totally rolled with it cause she’s a pro.

–Jared Leto instragrammed a photo of himself with a mustache and the world freaked out about not being able to see all of his beautiful face.

-Does any other new fall show look as good as Gotham? If so, I haven’t seen it.

–Taylor Swift’s new kitten is beyond adorable. Also adorable? The fact that she named her Olivia Benson.

-A new trailer for Dawn of the Planet of the Apes has landed. I’m a little tapped out on summer blockbusters, but this looks pretty great.