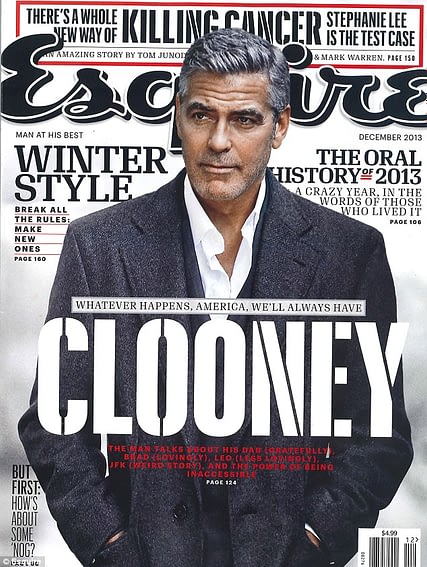 -The first thing I thought when I read George Clooney’s new Esquire interview was “Wait, I’ve already read this dog story. In Esquire!” He also repeats (practically verbatim) the freedom of speech comments he made in last week’s Hollywood Reporter roundtable. I guess when you’re George Clooney, you’re charming enough to get away with recycling anecdotes. But he also goes into some new juicy territory, making me wish The Monuments Men was still in Oscar contention so he’d keep giving interviews. Everyone’s focusing on his celebrity takedowns (he mocks Leonardo DiCaprio‘s self-importance, Russell Crowe‘s poetry, Ashton Kutcher‘s mindless tweets), but he’s equally enthusiastic about praising people he likes, including Bill Murray and Brad Pitt.

-One of the people he inexplicably continues to like is Julia Roberts. She paid tribute to him at this weekend’s BAFTA-LA awards, where she presented his award barefoot and made it all about her.

-Despite Julia’s antics, Sacha Baron Cohen stole the show by pretending to kill his elderly award presenter on stage. The crowd didn’t really get that it wasn’t real.

-In other award show moments, MTV edited out Miley Cyrus smoking weed onstage at last nights MTV European Music Awards. I’m more disturbed by her high-cut bathing suit. Between that and Iggy Azalea’s wardrobe malfunction, there was just way too much labia at that show.

-The best part of the EMAs was when Ron Burgundy presented Eminem with an award, and Em started quoting Anchorman.

-Was that an engagement ring on Katy Perry‘s finger at the EMAs? For her sake, let’s hope not.

-Start your week right with an eyeful of Idris Elba. You’re welcome.

-I hate to agree with Us Weekly about anything, but Kerry Washington’s new Lucky cover IS pretty damn terrible.

-I don’t know what kind of Photoshop magic the people at Bobbi Brown have, but they once again made Katie Holmes look old school glam. There’s currently a giant poster of her hanging at The Bay that’s so stunning, it always makes me double-take.

–Tom Cruise didn’t really compare his job to being a soldier, according to Tom Cruise‘s legal team.

–Emma Thompson is so damn charming, she even convinced Sean Penn to join her in a Mary Poppins singalong.

–Beyonce sang to a blind girl during her latest concert, and the Internet wept.

-Meanwhile, Beyonce reportedly lost her chance to voice Disney’s The Princess and the Frog because she refused to audition.

-Once again, I don’t think Dior is doing right by spokesperson Jennifer Lawrence. The back is interesting, but the skirt on that thing is terrible.

-Of course, her unfortunate dress didn’t stop JLaw from being an awesome human being. A lot. Seriously. It never ends.

-It looks like all her recent oversharing is starting to come back to bite Kaley Cucouo in the ass. She just sent out an angry tweet denying pregnancy reports.

–Chris Pine was photographed getting handsy with a mystery blond in Paris.

-After losing American Dad to TBS, Fox has ordered another new series from Seth MacFarlane. Have they learned nothing from Dads?!?

–Robert De Niro in talks to play Reese Witherspoon’s intern in a new movie. It’s weird how badly I want this to happen…

-Also, Gaga wants you to know that she’s addicted to marijuana.

-Due to NBC’s schedule f**kery, Parks and Rec will be airing their Halloween episode this week. At least they released a few funny preview clips.

–Lena Dunham interviewed Mindy Kaling for Rookie, where they talked about what it’s like to be a women running a TV show.

-Speaking of Lena, Norm MacDonald spent the morning trolling her on Twitter.

-A source (aka their publicist) would like you to know that Will and Jada Smith “didn’t leave each other’s side” during their son’s birthday weekend in Las Vegas, ok?

-God bless whoever recut Thor as an episode of My Super Sweet Sixteen.

–Matt Damon is following in George Clooney‘s footsteps and pocketing millions for being in an Nespresso ad.

–Leonardo DiCaprio turns 39 today. How great do you think he must have felt this morning, waking up to learn that George just took a dump all over his birthday?

-CW continues to prove that ratings don’t really matter. They just picked up full seasons of Reign, The Tomorrow People and The Originals.

-I don’t watch Doctor Who, but the early release of the trailer is making lots of people I know very happy.

-I hate Blake Lively’s dress here. I feel like she’s two seconds away from twirling in a meadow while singing about how the hills are aliveeeee!

-Meanwhile, her husband Ryan Reynolds crushed our dreams by revealing the airplane puke story was a lie.

-A new teaser for HBO’s Looking has dropped. Didn’t we already see this when it was called Queer As Folk?

-Here’s the trailer for Tar, James Franco‘s latest project starring Mila Kunis as his girlfriend, Jessica Chastain as his wife, and Zach Braff as his buddy. It’s directed by 12(!) people.