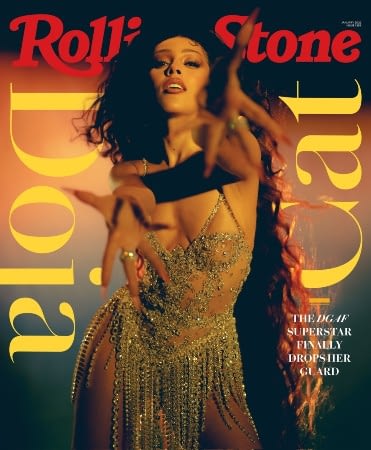 –Doja Cat is on the January cover of Rolling Stone Magazine. I’ve seen pics and videos of this woman a hundred times and I still can’t pick her out of a lineup. Total face blindness when it comes to her. In the interview, she was asked about her working relationship with Dr. Luke, whom Kesha has accused of abuse. “I haven’t worked with him in a very long time. A lot of those songs were…. There’s shit that he’s credited for, where I’m like, ‘‘Hmm, I don’t know, I don’t know if you did anything on that.’ The point is he’s gotten some credit for shit. And, you know, it’s whatever. I don’t think I need to work with him again. I don’t think I need to work with him in the future. I know that…I think it was definitely nice of me to work with him.”

-In light of the new allegations, Peleton has pulled their ad with Noth.

-Full reviews are still embargoed until Thursday, but the first reactions to The Matrix Resurrections hit Twitter and they are mostly glowing.

–Keanu Reeves showed up for the Toronto premiere last night. He’s the only celeb who can get away with not wearing a mask (at least he asked the crowd about it).

-Covid is messing up productions again. Both The Crown and Ghosts had to halt filming this week due to active cases on set.

-Meanwhile, Variety did a new story on covid affecting Hollywood and this paragraph has me wondering which two actresses they’re talking about: “Also in recent days, rumblings about two unvaccinated actresses has grown louder and more concerned — one up for Oscar contention in a prominent indie, the other the headliner of a December tentpole. The women continue to engage in publicity for their respective projects, some in person, which has alarmed the publicists and actors who are working the circuit alongside them.” The big tentpole moves out this month are really just Matrix, West Side Story and Spider-Man, no? Mayyyyybe Nightmare Alley and Don’t Look Up, but those feel like a stretch.

-When asked if he would ever consider guesting on girlfriend Zendaya‘s show Euphoria, Tom Holland said “Listen, I have been petitioning for this for a long time and it has not happened yet.” Make it work, HBO!

-I can’t stop watching the videos of Spider-Man crowd reactions. If I wasn’t so scared to leave my house again, I’d be there this weekend.

-Meanwhile, Spider-Man: No Way Home is poised to gross $200 million at the domestic box office, which is insane even in non-pandemic times.

-She hasn’t posted yet, but Beyonce has joined TikTok.

–Reese Witherspoon‘s reaction to hearing that Matthew McConaughey used to have a crush on her is all kinds of cute.

–Eric Clapton continues to make headlines for all the wrong reasons. The latest: he successfully sued a woman who tried to sell a bootleg CD on eBay.

–Sarah Snook says Succession’s finale parking lot scene was horrible to shoot. “I’m in high heels, and it’s a 45-degree incline. There’s rocks and stones. It’s a tight dress, and my makeup is melting off. And now it’s windy.” The whole time I was watching it I was marveling at her ability to hold a squat in heels that long.

–Adrien Brody tries to find redemption in the Clean trailer.

-Ted Lasso is coming back way earlier than I expected — July 23! Here’s the season 2 trailer.  Rewatching this show got me through the worst of the pandemic (so far).

–Demi Lovato apologized for going apeshit on a frozen yogurt shop. She had called them out for their sugar-free, dairy-free, and low-fat options, calling them a “diet culture vulture”. They responded that those were options for customers with health restrictions such as vegans, celiacs, and diabetics. It was such a bizarre story to begin with, but the optics of going after a small business right now didn’t help.

-TikTok Star Bryce Hall has been sued for assault and battery after an altercation at an LA restaurant was caught on camera.

–Pete Davidson made it clear to Jake Paul that he’s not a fan.

-The cast of The Good Place (minus Kristen Bell) had a sleepover.

–E. Alex Jung profiles are always a must-read, but his conversation with Mads Mikkelsen is an instant classic. Mikklesen talks about the Hannibal finale (“We actually did a couple of takes of the very last scene where we were looking at each other, and it was a little too obvious — it was almost a kiss. Me and Hugh [Dancy] were like, ‘Why not? We have a couple of takes. Let’s do one. It might be cool’…Bryan [Fuller] loved it, but he was like, ‘Too much, guys. It’s too obvious'”), what it was like to become recognizable in Denmark after playing a TV cop (“Since then, I’ve never bought a normal Coca-Cola. It’s always like, “Here’s your cola, Master Mads,” or “Get your fucking Coke, and get out of my shop.” There’s no neutral Coca-Cola anymore”), taking Rihanna‘s fake nails from the set of the “Bitch Better Have My Money” video (When we were done, I was like, “Are you done with them? Can I have some of them? I have a few friends who’re going to be so jealous when I show them this'”), and possibly the best career advice I’ve ever heard (“My approach to what I do in my job — and it might even be the approach to my life — is that everything I do is the most important thing I do…That means I will be ambitious with my job and not with my career. That’s a very big difference, because if I’m ambitious with my career, everything I do now is just stepping-stones leading to something — a goal I might never reach, and so everything will be disappointing. But if I make everything important, then eventually it will become a career”).

–Julia Roberts dances it out in her new Chopard ad.

–Taylor Swift‘s alleged stalker was arrested after he tried to break into her apartment. He apparently already has restraining orders from models Bella and Gigi Hadid.

-90210 reboot star AnnaLynne McCord shared her diagnosis of dissociative identity disorder. “All of my roles were splits, but I didn’t even realize I was doing it at all until I did 90210.”

-Game of Thrones’ Iron Anniversary seems to be an attempt to reverse the bitter taste the series finale left fans two years ago.

–Kim Kardashian freaked out when she found out she was an inspiration for Bridgerton’s wardrobe — and then quickly tried to finagle a set visit. I would too.

-I keep forgetting that the Oscars are this weekend! Steven Soderbergh, who’s one of the producers, says “You’ll feel like you’re watching a movie.”

-Here’s the trailer for Annette, a musical drama starring Adam Driver and Marion Cotillard, which is set to open Cannes on July 6. This trailer screams “not for me!!”