-Another day, another report that Lindsay Lohan has made off with jewellery that might not be hers. She was spotted landing in Brazil with a bracelet she took from the set of Anger Management.

-Meanwhile, Kristen Stewart and Lindsay have apparently bonded over their shared hatred of the paparazzi. This cannot end well for KStew…

-Congrats to Kristen Bell and Dax Shepard, who just welcomed a baby girl named Lincoln. (I like the name, but I would have liked it a whole lot more in any other year than this one.)

-Are Justin Bieber and Selena Gomez spending time together again?

–Angelina Jolie is shooting down reports that she and Brad Pitt already got married.

-I haven’t fully caught up with the show yet, but I really liked this article on why Bunheads shouldn’t be cancelled (it hasn’t been, despite the URL).

–Amanda Bynes is now threatening to sue people who say mean things about her, so I’ll just post this without comment: she’s working on a fashion line.

-A whole bunch of stars (including Sarah Jessica Parker, Elisha Cuthbert and Blake Lively) showed up to the grand opening of a Target store in Toronto last night. I can understand why Blake went — she’s been hanging around Ontario while her husband shoots a film in Sudbury. But SJP was a get! (Word is she was the nicest too, walking the aisles chatting with people about what they were buying.)

–Miley Cyrus says she totally didn’t go on a date with Nick Jonas this week.

–Liz from Roswell (or Natalia from Girls, for you hipsters out there) just had a baby girl.

-Saturday is Tabletop Day, where you’re encouraged to play board games. Seth Green even did a little dance about it.

-FX made a bunch of announcements today, including the fact that they’re going to start airing reruns of Sports Night, Parks & Rec, Arrested Development and Freaks & Geeks. I just blue myself.

–Taylor Swift will show off her adorkable side on the season finale of New Girl. (Sidenote: next week’s episode will air Thursday instead of Tuesday, and it’s promisingly titled “First Date.”)

-I’ve never been a fan of planking or Swintoning or any of those other dumb photo trends, but I can totally get behind this one that’s taking off in Japan right now!

-I really, really don’t need to get into another TV show but man, is Orphan Black getting rave reviews. (Good on Tatiana Maslany, the Canadian actress who landed the lead.)

-Speaking of TV, Matthew Weiner says he knows you all want Sal back on Mad Men, but he doesn’t care.

-This is unexpected: Christopher Nolan is reportedly courting Matthew McConaughey for the lead in his next movie.

-Here’s the first bit of footage of Matt Damon and Michael Douglas in HBO’s Liberace biopic. So many sequins…

-I love the Nerdist podcast. I love YouTube’s My Drunk Kitchen. So watching the Nerdist’s Chris Hardwick cook fish sticks made my day! “Isn’t cooking so awful??!” Yes. Yes it is.

-I also enjoyed watching Amy Poehler turn into a fangirl while talking to Facts of Life writer Irma Kalish.

-Gawker has a pretty good rundown of all the f**kery happening on NBC’s Today right now.

–Kate Bosworth is looking skinnier than ever these days.

-The Lizzie Bennet Diaries wrapped up today. *sigh* I really liked Daily Beast’s video recap of all 100 eps in 100 seconds.

-Speaking of people in the LBD universe, John Green (who wrote the amazing The Fault in  Our Stars) just announced that he’ll be writing the introduction for a book being released about the girl that inspired his novel.

-I kind of adore this photo of Joshua Jackson and Diane Kruger. #PaceyForever

-The new trailer for Kick-Ass 2 is all about Hit Girl, which can only be a good thing. 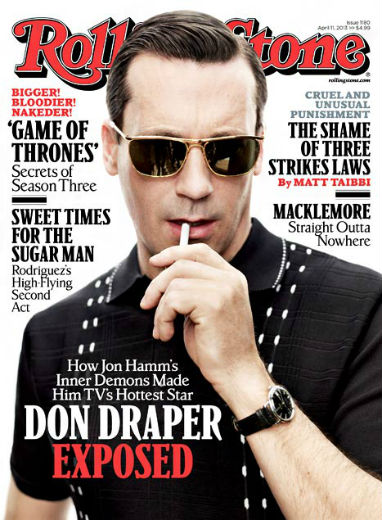 –Jon Hamm really wants us all to stop talking about his dick already. Yeah, good luck with that, buddy.

-Lots and lots of stars are speaking out for marriage equality today, but I think I like Beyonce’s simple message best. Michael K. Williams (Omar!) also killed it.

-It’s official: Justin Bieber‘s neighbours DO NOT have Bieber Fever.

-Meanwhile, Bieber is defending his recent antics by saying he’s “young and makes mistakes.” True, but did all of those mistakes have to be in a span of three weeks?

–Lindsay Lohan showed up to work on Anger Management an hour early and was super well-behaved yesterday — which obviously couldn’t last. She delayed production on her second day.

–Gucci Mane was arrested for assault after allegedly hitting a fan over the head with a champagne bottle.

-This might be the best used car Craigslist ad in the history of ever!

–Amanda Bynes tried to hide from the paparazzi — by hanging out in Times Square.

-They opened up international donations on the Veronica Mars Kickstarter campaign today, and it crossed the $4 million mark. Here’s a cute behind-the-scenes video the cast and crew shot.

-Meanwhile, I really loved this blog post about the 10 things we learned from Veronica Mars.

-Missing Ryan Gosling? There’s a hotline for that!

–Ashley Judd has reportedly decided that she doesn’t want to run for Senate after all.

-Well, this is one way to promote your movie during Earth Hour.

–Shia LaBeouf showed up opening night of that Broadway play he quit and sat in the front row, causing Alec Baldwin to skip a beat. He was either trying to be supportive or trying to be a dick.

-A new trailer for Game of Thrones has landed. Apparently, dragons are a major theme this season.

-This almost makes me not hate The Walking Dead‘s Andrea.

–Rob Lowe flew around with a jet pack — and because the internet rocks, there’s video!

–Halle Berry is 46 and still looks like this in a bikini. Sigh.

–Ryan Reynolds eats Burger King? But I thought he was married to a domestic goddess who has devoted her life to feeding him?

-I’m not a big fan of gin, but I’d drink gallons of it if Idris Elba wanted me to.

–Andy and Lana Wachowski will be producing a show for Netflix.

-The buzz is building that Anderson Cooper may replace Matt Lauer on The Today Show.

-Get ready to hate yourself (more?): Madonna’s net worth just hit $1 billion.

–Olivia Wilde and Jason Sudeikis were photographed looking all lovey at Disneyland.

-A new teaser trailer for The Great Gatsby has landed. Check out Leo‘s big “noooo” scream at 0:23. I love when he gets all screamy. Remember this? “Staying for thine to keep him company!!!!” *swoon*

-Here’s the first trailer for White House Down (not to be confused with the similarly premised Olympus Has Fallen). Things still blow up real good — but this time with Channing Tatum!

-Why (WHY????) does Justin Bieber insists on walking around shirtless, especially at an airport? It’s not like he was wearing a shirt made of metal when he went through security. He can’t possibly be this proud of his starter muscles — can he?!

-Meanwhile, Justin‘s terrible month continues (and I’m not even talking about the fact that the Globe & Mail just called him “a national embarrassment“). He’s reportedly being investigated for battery after allegedly getting into an altercation with a neighbour this morning over loud parties that were happening at his house while he was away.

-Is Kanye West‘s upcoming album going to be called I Am God? Ugh.

-A man has been arrested for breaking into Bryan Cranston’s car and stealing one of the final Breaking Bad scripts — which still hasn’t been found. What kind of a person would mess with Cranston? He’s the one who knocks!

-I know nothing about Jennifer Lawrence‘s upcoming movie with David O. Russell, but her hairstyle has already sold me on it.

-Jebus! An actor from Game of Thrones got into a noise dispute at his hotel and had his ear bitten off! Between this and the Jared Leto story, severed ears are super in this week.

-More proof that Smash is dead: Debra Messing just signed on for a CBS pilot.

-Can’t Britney Spears afford a bikini that fits her?

-Meanwhile, everyone is still really confused about what exactly it is that her new boyfriend does.

-I’m getting as tired as everyone else of the insane Justin Timberlake overload, but his Michael Caine impression in this interview is pretty great.

-MTV is going to honour Emma Watson at the Movie Awards with the Trailblazer tribute.

–Dennis Quaid‘s rep say he hasn’t called off his divorce after all. Guess we’ll have to keep pinning all of our reconciliation hopes and dreams on Danny & Rhea.

–Amanda Bynes continues to implode before our eyes.

–This cute photo of Daryl and Carol makes me feel much more hopeful about the Walking Dead finale.

–Angelina Jolie is back in Africa for the UN, where she was spotted wearing a gold band.

-I love these prints of Parks and Recreation characters as superheroes, but Ben Wyatt as the Green Lantern? He’d clearly prefer to be Batman.

–Jim Carrey is mocking gun owners in a new video for FunnyorDie.com. Too bad it’s not, you know, funny.

-Raise a glass (or four) of celebratory wine: Cougar Town has just been renewed for another season.

–Pretty Little Liars also got renewed — along with a spinoff.

-I’m really digging A$AP Rocky. Not only is his new video great, he’s super into fashion and is trying to discourage homophobia in hip-hop.

–Homeland’s Damian Lewis has some bad news for anyone still ‘shipping Carrie and Brody.

-Good lord, exactly how many Hemsworth brothers are we supposed to care about?

–Kevin Bacon gives the weather in terms of six degrees of him. J’adore!

-A new clip from Greetings From Tim Buckley has surfaced. I really, really liked Penn Badgley‘s performance in that movie.

-I’m pretty sure I spent way too much time today debating whether to vote for Buffy/Angel or Buffy/Spike in EW‘s TV couples tournament.

-I’m intrigued by the trailer for The Story of Luke, starring Seth Green and Kim Bauer.

-Speaking of new trailers, here’s the latest TV spot for Oblivion, which really, really needs to succeed for Tom Cruise’s sake. (If nothing else, at least the new M83 song for the movie’s soundtrack is great!)

-A 20-second teaser for the new Wolverine movie has landed (as well as a Vine). What, is he a ninja now?