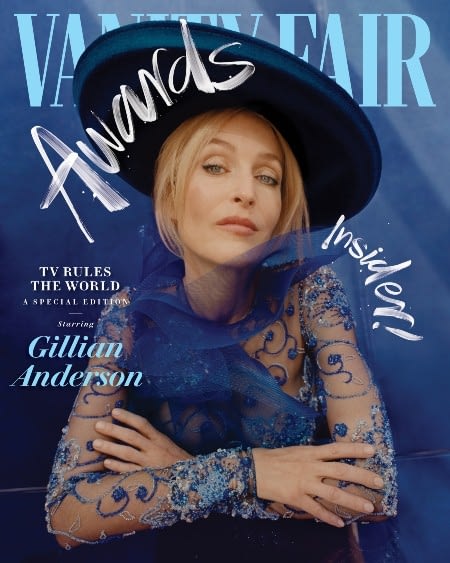 –Gillian Anderson, Nicola Coughlan and Alia Shawkat are just a few of the TV stars featured in Vanity Fair’s latest issue. All of the portraits are great, but Hugh Grant‘s is especially stunning. That man is aging like a fine wine.

-The BBC has apologized for its “deceitful” Princess Diana tell-all interview conducted by Martin Bashir in 1995 (considered a definitive bombshell for the royal family). Bashir is said to have shown fake bank statements to Diana’s brother Charles Spencer that suggested the palace staff were working against Diana and being paid to spy on her. This “deceived and induced [her brother] to arrange a meeting with Princess Diana.”

–Prince Harry responded to the news, saying, “What deeply concerns me is that practices like these — and even worse — are still widespread today. Then, and now, it’s bigger than one outlet, one network, or one publication. Our mother lost her life because of this, and nothing has changed.”

-In lighter royal news, Prince William showed off a surprisingly buff arm when getting his first shot.

–Angelina Jolie posed for a photo while covered with bees to raise awareness for conservation efforts.

-Did y’all know that Dermot Mulroney plays cello and has worked on movie scores, including Rogue One, Mission Impossible, Inside Out and Star Trek: Into the Darkness?

-I also really liked this interview with Shadow and Bone author Leigh Bardugo. “Teenage girls have so much sway over culture, yet people sneer at the things that women and girls love, and are contemptuous of the creators of that content, particularly if they are women. To me, that contempt speaks to a deep fear. When you start dictating culture, money gets involved and people take notice. When I see someone deride things that women and girls find pleasure in, all I see is someone fearful that women will overtake the culture they’ve had dominion over for so long.”

–KJ Apa is going to be a dad. The Riverdale star revealed on Instagram that he is expecting his first child with model Clara Berry.

–This thread captures what various crew members of Person of Interest have said about working with Jim Caviezel, and it’s intense. He reportedly resisted shooting a scene in which his character saves a gay couple, and the stunt crew wouldn’t let him around sharp objects.

-Good news: Crave is going to air the Friends reunion here in Canada.

-A British reporter interviewed Ted Lasso cast members outside soccer match without realizing who they were. Delightful!

-In his Rolling Stone cover story, BTS’ V talks about his upcoming mixtape and his love of The Godfather. I just finished a book where the author thanked BTS in the acknowledgements, so I guess I’m officially the last one to join the Army.

–Kate Hudson will also be in Knives Out 2. At this point, it might be easier to list who’s NOT been cast in this thing.

–Chris Pratt‘s band From Parks and Recreation is releasing an album. Mouse Rat!

-People made fun of how old Ben Platt looks in the trailer for Dear Evan Hansen (where he’s playing a high schooler), and he called out “randos beings jerks about age.”

–Kevin Feige now says it was a mistake to cast Tilda Swinton as The Ancient One in Doctor Strange, since she’s a white woman.

-Here’s the trailer for Only Murders In The Building, a new Hulu comedy starring Steve Martin, Martin Short and Selena Gomez.

Did Drake Land That Rihanna Kiss?