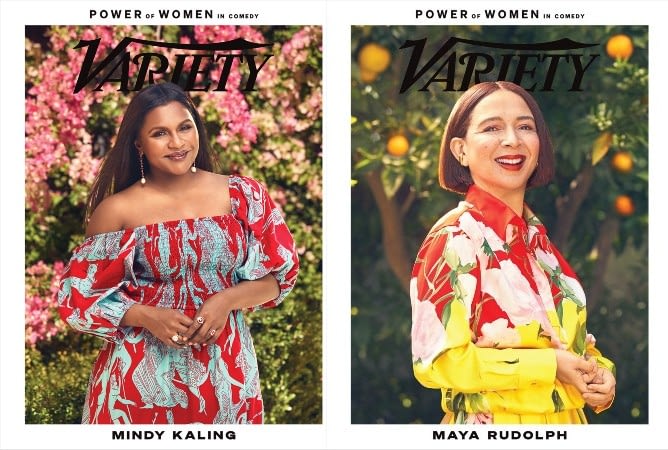 -In Variety’s Power of Women in comedy issue, Mindy Kaling says she’s been busier than ever during quarantine, executive producing “The Sex Lives of College Girls” and Never Have I Ever, as well as co-writing scripts for the third Legally Blonde movie and a Priyanka Chopra wedding comedy. Meanwhile, Maya Rudolph talks about burnout, Beyoncé, Bridesmaids, and becoming a bonafide Disney villain for Disenchanted.

–Zendaya, Anya Taylor-Joy and Law Roach cover the Most Powerful Stylists issue of the Hollywood Reporter.

-Warners and DC are reportedly committed to hiring a Black director to tackle what will be the first cinematic incarnation of a Black Superman. Barry Jenkins, Steven Caple Jr., J.D. Dillard, Regina King and Shaka King are said to be under consideration.

–Adrien Brody is the latest to join Succession season 3. Clearly, they have a height requirement.

-Italy would like the stolen Roman sculpture in Kim Kardashian‘s house back.

-A Joker 2 with Joaquin Phoenix is reportedly still in the works. Oh god, I can’t take another news cycle about it.

-Also, a DeuxMoi blind suggests Joaquin Phoenix was the celeb Alia Shawkat talked about in this video and I can’t stop thinking about it.

-I don’t watch the Food Network but Pioneer Woman Ree Drummond holding a maskless wedding for her daughter at their ranch — where a couple months ago her husband almost killed their nephew while racing fire trucks — seems bad.

-Here’s our first look at House Of The Dragon, the new HBO Game Of Thrones spinoff.

–Julianna Margulies posted about how her “in-person’ Oprah interview was done via green screen, apparently unaware that we’re all obsessed with her history of green screens.

–Jennifer Garner has reportedly rekindled her relationship with John Miller.

-I was so excited to see the headline that Henry Golding has joined Dakota Johnson in Netflix’s update of Persuasion, assuming he was playing Captain Wentworth (my fave Austen leading man). But it turns out he’s playing the awful Mr. Elliot. Who in the world are they going to cast as Wentworth who will come off as more charming than Henry Golding?!

–Jodie Turner-Smith was on Seth Meyers‘ show and talked about how she and Joshua Jackson met. “We had a one-night stand.”

-Loki will drop on Disney+ on Wednesday, leading Tom Hiddleston to say “Wednesdays are the new Fridays.”

–Anderson Cooper has scored the lowest ratings among Jeopardy guest hosts so far.

-If you think you’re going to have anxiety on your first plane ride post-pandemic, Joe Jonas wants to help you destress with a… [checks notes] … replica of his hand.

-The reviews for HBO’s Hacks are super positive. The Jean Smart renaissance continues!