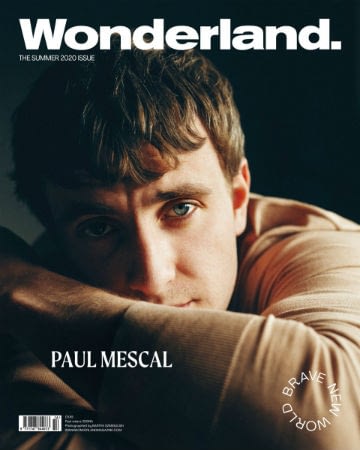 -Have you started the TV adaptation of Normal People? It’s great — and it’s also the reason everyone on the internet is currently lusting over the lead actor, Paul Mescal. He’s on the new cover of Wonderland.

-I’m half way through the show but the only sour note (so far) is the bizarre choice to use the overplayed “Hide and Seek” song during a pivotal scene. Why!?! But it led me to this great read on how early 2000s teen dramas set the bar for TV soundtracks. (I remember watching the screener for the Gossip Girl pilot and turning to my friend and saying “there’s no way they’ll clear all these songs when it airs.” And then they did!)

-Meanwhile, do you think Noah Centineo is feeling threatened by Paul Mescal’s sudden rise and that’s why is IG captions have gotten even more indecipherable?

–Justin and Hailey Bieber are giving fans an “intimate look” into their quarantine lives in a new Facebook Watch reality show titled The Biebers on Watch, which premiered today. There will be 12 episode, dropping Mondays, Wednesdays and Fridays.

–Neil Gaiman and wife Amanda Palmer seem to have split during quarantine. The fact that Palmer made her statement via a paid perk for her Patreon subscribers is both annoying and completely on brand.

-Just when you thought the world was starting to forget about Twilight, Stephenie Meyer is getting set to release Midnight Sun — a retelling of the first Twilight book from Edward’s point-of-view. It’ll come out Aug 4.

-A judge has postponed a hearing on the continuation of Britney Spears‘ conservatorship until at least August.

-Also Rose Byrne didn’t mean to imply that Phyllis Schlafly was a feminist.

–John Krasinski enlisted some Oprah, Jon Stewart and Malala Yousafzai when he surprised graduates from the class of 2020 on the latest episode of Some Good News. Samuel L. Jackson and Ryan Reynolds appeared in other segments.

-On Watch What Happens Live, Rosie O’Donnell told Andy Cohen a disturbing story about Bill Cosby’s interaction with one of her producers backstage.

-The authors of a new tell-all book about Meghan Markle and Prince Harry reportedly had their cooperation.

–Chris Evans joined Instagram on Friday to announce that he is bringing together Robert Downey Jr., Scarlett Johansson, Chris Hemsworth, Mark Ruffalo and Jeremy Renner for a virtual hangout as part of the #AllInChallenge.

–Judi Dench‘s grandson continues to crush it with her on TikTok.

–Scott Disick has checked himself back into rehab in after continuing to struggle with substance abuse issues.

–Gal Gadot broke social distancing rules for her birthday. It is my birthday this week. I will not be doing this.