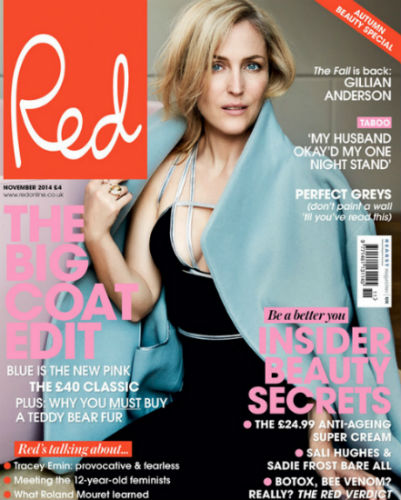 –Gillian Anderson looks fantastic on this magazine cover (seriously, is she aging backwards)? In the interview, she talks about getting paid less than David Duchovny during the first few years of The X Files. I distinctly remember Duchovny bitching about her complaints back then. It was my first heartbreaking realization that he might be kind of a dick.

-Speaking of covers, Anne Hathaway covers the November issue of Elle UK, in which she talks about trying to ignore what people think of her. “The fame thing? F*cked me up for a really long time.”

–Amber Rose‘s friend told his radio audience that she spilt up with Wiz Khalifa after walking in on him having a threeway with twins. Yup, that would do it!

-Sadness. Yvette Nicole Brown (who plays Shirley on Community) will not be returning to the sitcom for its sixth season because she’s spending time with her ill father.

-Doctors don’t know if Tracy Morgan will ever perform again.

-I didn’t love Chris Pratt‘s SNL episode as much as everyone else did (no fault of his, I just found the whole thing pretty ‘meh’.) Here are Sarah Silverman’s promos; let’s hope her ep is funnier.

–Amanda Bynes was reportedly kicked out of fashion school after reportedly paying people to do her homework.

-Congrats to Isla Fisher and Sacha Baron Cohen, who are expecting their third child.

–Charlize Theron still can’t figure out how to be nice at Soul Cycle.

-The final Interstellar trailer has everyone wondering if it’s November 7 yet?

Melissa McCarthy Gets Trimmed in The Heat Poster