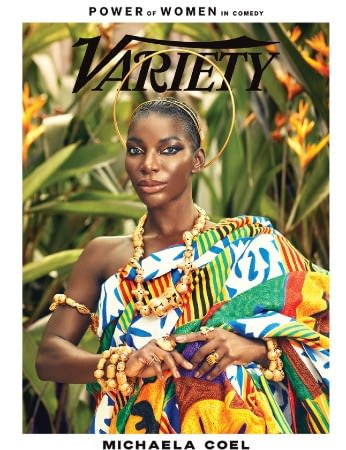 -Variety’s Power of Women covers continue to crush it, but the Michaela Coel one is spectacular. In the interview, she talks about Jane Fonda being a fan of I Will Destroy You (“I imagine if I bumped into her outside of the supermarket, we’d be nerding out on all of the hidden meanings and layers because I can see that she really gets it. She watches it the way that I dreamed the audience would watch it”), and “meeting” Kerry Washington at the SAG Awards (“I imagine, if the show was in real life, she’d be sat over there and I’d be way too shy to go over and say, ‘Hey, I’ve been watching you on my screen for decades.’ I was still too shy to say any of that on Zoom, but she knew my name. I was like ‘Oh my God, hi!’ You can’t do that in real life”)

–Meghan Markle and Prince Harry have shared a never-before-seen pic of Archie on his 2nd birthday. They’re asking fans to celebrate by donating to the Vaccine Alliance.

–Mariah Carey posted a video of getting her second shot and panned to the florescent lights saying “Would I ever go into this lighting for no reason?” I love her.

–Paris Hilton addressed one of her most controversial outfits, claiming she never wore a tank that said Stop Being Poor and it was photoshopped. I don’t know if that’s true?

–Jessica Alba is having a good week. Her Honest Company officially went public, raising $413 million in its IPO.

-Sanditon’s cancelation has been reversed by PBS, which just ordered two more seasons of the show. I’m guessing this wouldn’t have happened without the breakout success of Bridgerton. I liked the first season well enough but it has the potential to be much better.

–Lilly Singh’s NBC late-night show is coming to an end, but she’s keeping busy. She’s set to star in a scripted comedy for Kenya Barris at Netflix and develop unscripted far for NBCU.

–Camila Cabello’s jump to acting hit a road bump. Her Cinderella movie is skipping its planned theatrical debut and heading straight to streaming.

-I haven’t watched Grey’s Anatomy in ages, but I might tune into this week’s for the Japril reunion.

-Why yes, I will read an oral history of Madonna’s Truth or Dare, thank you.

-Paramount Plus will release a new movie every week.

-I kind of want to order from UberEats this weekend just to see if I can score a free candle from Drake.

–Courteney Cox says taping the Friends reunion “was unbelievable, so emotional” and it will feature “a lot of special surprises.”

-Michael B. Jordan says he bombed his Star Wars audition because the franchise’s secrecy gave him no time to prepare.

-Here’s the trailer for the final run of episodes of The Bold Type.

-I feel like the Tina Fey-produced new Peacock series Girls5Eva is exactly what I need these days. (It’ll premiere in June on W in Canada.)

–Gina Rodriguez stars in the trailer for Netflix’s Awake, in which the entire world goes crazy after everyone is suddenly unable to fall asleep. As someone who occasionally suffers from insomnia, this whole premise freaks me out.