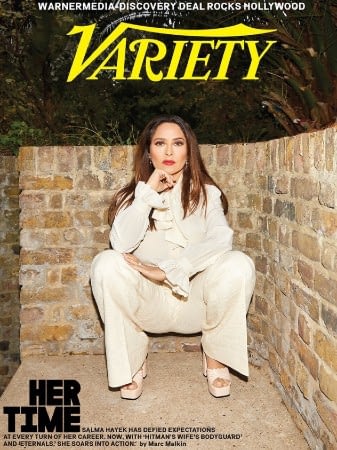 –Salma Hayek covers the new issue of Variety and reveals that she had COVID-19 so bad that she was put on oxygen and had to self-isolate for seven weeks. She also talks about the NYT essay she wrote about being harassed by Harvey Weinstein. “When I wrote it, I didn’t even know if I was really going to show it to anyone. I kept saying, ‘Who wants to hear my story? Why am I giving myself self-importance?’ ”

–Bennifer is going strong — or are they? The more they’re photographed together, the more I wonder how PR-driven this all is. And then there’s stories like how Ben Affleck is back to wearing the watch Jennifer Lopez gave him 18 years ago or how they were spotted making out between sets at the gym. Who does that?!?

-I’m still trying to wrap my head around the throuple-y looking photos of Rita Ora, Tessa Thompson and Taika Waititi. My first instinct was that they knew the paps were there and were playing it up, but also what an inadvisable flex when in the middle of shooting a huge film for Disney, of all places.

-Oh, I guess Tessa Thompson is just making out with everybody and living her best life.

–Julianna Margulies says she and George Clooney had such great chemistry on ER because they never hooked up — and then she dropped this bomb: “As he used to say, ‘You don’t shit where you eat.’ What he meant by that was the famous story about Moonlighting with Bruce Willis and Cybill Shepherd. They had sex on the pilot. And then the show got picked up — and then they hated each other. Or David Duchovny and Gillian Anderson [on X-Files]. The same thing happened. And then they hate each other and you’re stuck on a show for seven years together. That’s agony. Life’s too short.” As someone who followed all thing X-Files obsessively for years, I’m not sure this tracks (the only time they really seemed to clash — publicly anyway — was when she was demanding equal pay). Still, I’ll take the tea.

–Lady Gaga spoke candidly about becoming pregnant after surviving sexual assault. The singer explained that it was important to her to share her own painful story – that included turning to self-harm – to let others know there is a path forward.

-Following an investigation, the showrunner of CBS’ Bull is leaving the show, as is actor Freddy Rodriguez.

-I did not have “Finding a profile of Johnny Knoxville to be completely engrossing” on this weeks’ bingo card, but here we are.

–Justin Bieber shaved off his problematic dreadlocks and all is right with the world again.

–Timothee Chalamet has been cast as a young Willy Wonka. Sigh.

–Emily Blunt went viral last week when she seemed to be angry about getting a press junket question about the Fantastic Four, but when you watch the full interview she was actually lovely about it. This stuff is so dumb. There’s a reason actors are asked the same question over and over again at a junket — it’s because their editors have told them to, knowing that topic is going to generate pageviews. There were many times I’d interview someone and cringe-ask a question I didn’t want to, but that’s the game.

–Paul Wesley has no f*cks left to give when he’s asked about his former Vampire Diaries costars, and I love it.

-Legends of Tomorrow is making a Beebo animated special for the holidays. Bless them!

-This interview with Renée Elise Goldsberry is excellent. “I would 100% be lying to you that I was 35 years old right now if the f*cking internet did not tell every motherf*cker my age.”

–Hugh Grant says Drew Barrymore was ‘so nice‘ in a letter she sent him amid his cheating scandal.

–Lil Nas X had to cut his pole routine short on SNL this weekend when his pants split (“I was doing my little sexy dropdown, and boom, I feel air!”), but he got to do the full routine on the Tonight Show.

–Lindsay Lohan is dipping her toe back into acting with a Netflix holiday movie, which seems like a smart, low-stakes move.

-I love how obsessed everyone is over that photograph in Mare of Easttown. I’m still convinced that John is the father of the baby if not also the killer, but I also adore this theory about Lori.

-Here’s our first look at Ryan Reynolds and Rob McElhenney‘s docuseries about buying a soccer team in Wales.