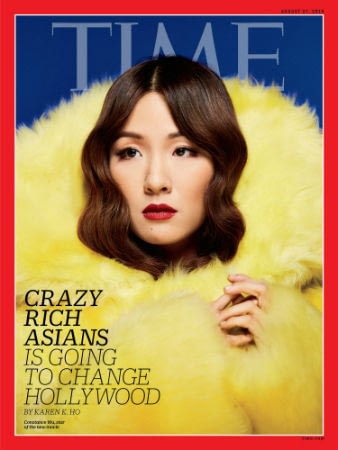 –Constance Wu’s cover of Time is fabulous (and it makes me even more sad that fashion magazines didn’t snatch her up for their Sept issues). The accompanying article by Karen K Ho is also great. Ho also tweeted some tidbits that didn’t make it into the article, including the fact that Wu specifically asked her publicist for Asian-American women to interview her as much as possible, because she wanted to create more opportunities.

-I really liked this article about Crazy Rich Asians from the perspective of an Asian American. (Speaking of which, Vox’s Today Explained podcast made me tear up this morning.)

-This is a great interview with Lana Condor, the lead of To All The Boys I’ve Loved Before. (I can’t believe this movie is bringing back scrunchies, though.)

-Whoa, what happened with Ruth Wilson and The Affair? I stopped watching a couple of seasons ago (even the lure of Joshua Jackson couldn’t tempt me), but I heard about the big twist from two weeks ago. On CBS This Morning this morning, she says “I did want to leave, but I’m not allowed to talk about why.” Things get REAL awkward, and after some hemming and hawing Gayle King asked her if it was about “a disagreement about money – male and female salaries?” and she responded “I’ve never complained to Showtime about pay parity.” (FF to around 4:30 in this video).

-Showtime has since released a statement (which is basically a non-statement): “We can’t speak for Ruth, but heading into season four everyone agreed the character’s story had run its course.”

-People is wading in on the Brangelina battle, with a source saying “they’ve always had different parenting styles.”

-In honour of her bday, Madonna also released her full performance from this year’s MET gala.

-Also turning 60 and looking ah-maz-ing is Angela Bassett, who celebrated by posting a bikini pic.

-As expected, Blackish’s Kenya Barris has inked what sources say is a three-year, high-eight-figure overall TV deal with Netflix. I don’t blame him because a) ABC did him dirty and b) money!

-These photos of Tiffany Haddish by Annie Leibovitz for Vogue’s latest issue are amazing.

-After taking a meeting with James Gunn, Disney still isn’t bringing him back for Guardians Vol. 3.

–Kim Cattrall has the best rejection story: “Got replaced in a TV pilot by a major TV network boss because he said I had no Sex Appeal.”

-Speaking of SATC stars, this thread makes me want to move to NY so I can vote for Cynthia Nixon.

–TJ Miller is defending himself against his former Silicon Valley co-star Alice Wetterlund who accused him of being a “bully and petulant brat.” Weeks later, he says he’s not a bully, just a “benevolent benign maniac.” Uh huh.

-I can’t believe  This Is Us’ Justin Hartley has a kid in high school.

-In case you’re wondering, this is why everyone is freaking out about dick soap. (I’m more freaked out by someone making money off fan fiction who isn’t the author.)

-In his new GQ interview, Pete Davidson says his relationship with Ariana Grande progressed even faster than we thought: “The day I met her, I was like, ‘Hey, I’ll marry you tomorrow,’ ” he says, grinning. “She was calling my bluff. I sent her a picture [of engagement rings]. I was like, ‘Do you like any of these?’ She was like, ‘Those are my favorite ones,’ and I was like, ‘Sick.’ ”

–Ariana Grande did a Little Shop of Horrors duet with James Corden and got a piggyback through Starbucks in the latest Carpool Karaoke, which aired Wednesday night. I love that she knows exactly what people say about her and mocks it: “Did you know I demand to be carried everywhere? That is the kind of pop star I am! If you see me anywhere, it’s cause I didn’t walk there myself; I promise.”

Anya Taylor-Joy’s Plots Her Next Move