.@rihanna & A$AP Rocky were spotted together in Barbados on Sunday (Dec. 27). 🇧🇧 pic.twitter.com/ltXM2bTp8w

-If you were online at all over the last few days, you’ve probably caught up with the Hilaria Baldwin drama, in which it was revealed that Alec Baldwin‘s wife was actually born in Massachusetts and has faked a Spanish accent for years. This is my favourite kind of end-of-year scandal: a harmless saga featuring random celebrity cameos (hello, Amy Schumer) and a couple who keeps digging a deeper hole after getting caught up in their own lies.

–Constance Wu welcomed her first child with her boyfriend, musician Ryan Kattner — and they did it 6 months ago and managed to keep it under wraps.

–Nick Cannon and his girlfriend, Brittany Bell, also welcomed their second child together over the holidays.

-Personally, I adored Bridgerton on Netflix, even if it’s not without its flaws (the showrunner insists it’s not just colour-blind casting but the show barely engages with race at all). Also, a lot of people’s favourite book is the one focused on Penelope (which I haven’t got to yet), but the reveal at the end of this season makes me wonder how much the audience will still be rooting for her when it’s time for her love story. In any case, if the show follows the books the next season should focus on Anthony and his new love interest, who’s the best character. Like, so good she makes him tolerable.

-We can’t talk about Bridgerton without talking about THE SCENE. Perhaps because I just read the book I was expecting it, but I was surprised at how vocal the reaction to it was. The scene in the book is even *more* problematic but it does a better job with Simon’s POV in the aftermath than the show does. In the book, he more clearly resists, his reaction stutter is worse, it explores his feelings of betrayal more deeply, she’s way more repentant, and he physically separates from her until he can sort out his feelings. Still, I can’t help but wonder why the show didn’t just drop that scene altogether, or at the very least focus more on Simon’s reaction than Daphne’s.

-Speaking of dubious sex scenes in this week’s pop culture, this is a very, very good piece on both Wonder Woman 1984 and Bridgerton’s missteps when it comes to the lack of male consent.

-Speaking of WW84, this review nails it. I still can’t believe that they made Wonder Woman a secondary character in her own sequel, and that her main storyline was about how she’s spent the past 70 years pining (ha!) for a guy she once spent a week with.

-There are too many Batman movies coming. Way, way too many.

–Prince Harry and Meghan Markle have released a holiday podcast special on Spotify. They had Stacey Abrams as a guest and she talked about #BlackLivesMatter and the importance of voting which helped turn Georgia blue.

–Halsey is taking a social media break after apologizing for sharing a photo depicting her eating disorder without adding a trigger warning.

-Netflix is introducing a new weekly chat show about its trending shows. I wonder how this is going to work, seeing as you can’t really have aftershows for series when all your audience is at different stages of their binge?

-Speaking of Netflix shows, the cheerleading drama Dare Me debuts today and critics love it.

-The new trailer for the CW’s Superman & Lois set a familial tone. Ugh, don’t let me get sucked into another CW superhero show.

–Michael B. Jordan will make his directorial debut with the upcoming third installment of the Creed franchise.

–Lori Loughlin has been released from prison after her 2-month sentence following her college bribery scam.

–Variety apologized to Carey Mulligan for its “insensitive language and insinuation” after she says its review of Promising Young Woman was “basically saying that I wasn’t hot enough” for the role.

-Speaking of Variety, they had a deep dive into Shia LaBeouf’s career that seems to have gotten overlooked in the holiday rush. It includes a couple of interesting tidbits, like how Harry Styles replaced him in Olivia Wilde’s upcoming film Don’t Worry Darling because Wilde has a “zero asshole policy” on her sets.

–Mads Mikkelsen is the best storyteller.

–Eddie Murphy, Arsenio Hall and Jermaine Fowler star in the Coming To America 2 trailer, coming to Amazon Prime in March. 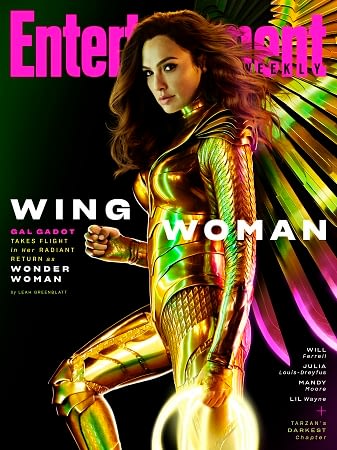 goodmorning to this amazing human @justinbieber God is working pic.twitter.com/u7GFmj7oJE

–Constance Wu addressed her controversial tweets when Fresh Off The Boat was renewed in a new interview with the LA Times. “I had this moment of heat where I got upset because I had to give up a job I had been looking forward to and had been chasing for a while..I’m an actress—I can be dramatic.” She added, “I like that people are expressing their feelings about it, because it improved my awareness of what it means to be a public figure. I’ve had a back and forth about it. It’s the line between being a role model, but also authenticity.”

–Billie Eilish lashed out at Nylon magazine for not getting her consent to use her likeness on the cover.

–Richard Linklater is directing an adaptation of Sondheim’s Merrily We Roll Along that will star Ben Platt and Beanie Feldstein and be shot over the course of *20 years*.

-Lainey has a new blind riddle! The mentions of “stupid” and “infamous” make me think it’s not about Shawn/Camilla. Justin/Hailey? Miley/Kaitlyn?

-Meanwhile, here’s Shawn Mendes without a shirt and eating an avocado. Just because.

–Harry Styles likes the sitcom The Other Two. Good taste!

–Lindsay Lohan’s new song slaps, much to everyone’s surprise. (FF to the 2 min mark to hear a clip from it.)

-A Marriage Story starring Scarlett Johansson and Adam Driver is getting absolutely glowing reviews. I considered using one of my TIFF tickets on this but it’s coming soon to Netflix. Plus, Noah Baumbach aren’t typically my jam.

-I don’t know how I missed CBC’s segment of Jam or Not a Jam with Lizzo but it’s great. She defends Nickelback (“It has a beautiful climax…The beat drop out? I think they get a lot of shit because he had a curly blond perm because this is an amazing song”) and discovers BTS (“Keep playing because I’ve never heard a BTS song. This is making me excited in a lot of weird ways!”)

–Brie Larson belted out an acoustic version of Normani‘s Motivation which was good — but I also kinda wish she hadn’t? I’m cool with her version of Miley Cyrus’ “Slide Away” though.

-Netflix’s cheesy new rom-com Falling Inn Love is getting good reviews. Not that bad reviews would have stopped me from watching it, but still.

-HBO is releasing the new episode of Succession tomorrow because of Labour Day weekend. And it’s the introduction of Holly Hunt’s character!

-This thread from Cole Hersch (creator of I’m The Dad Now) about the time he was accidentally cast on a dance show is gold.

–Meryl Streep play a widow investigating insurance fraud that turns out to be the scandal at the heart of the Panama Papers in The Laundromat trailer, coming soon to Netflix.