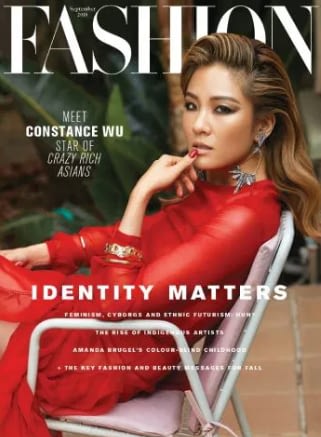 -Is there anything better than seeing Constance Wu on magazine covers? She graces the latest issue of Fashion, in which she talks about feeling an obligated to represent Asians in Hollywood.

–Tiffany Haddish tackled Vogue’s 73 Questions, and the results are hilarious.

-It a wide-ranging podcast interview, Evangeline Lilly got very candid about her struggles on Lost, talking about uncomfortable nude scenes (“In season 3, I’d had a bad experience on set with being basically cornered into doing a scene partially naked, and I felt had no choice in the matter. And I was mortified and I was trembling when it finished. I was crying my eyes out and I had to go on do a very formidable, very strong scene thereafter”) and how she hated that her character became little more than a love interest (“I did throw scripts across rooms when I read them because I would get very frustrated by the diminishing amount of her own story that there was to play”).

-This was pretty much my trajectory with HBO’s Succession, too: I thought it was super boring at first but stuck with it because critics I respect said it gets better, and now I’m hooked.

-This oral history of Breaking Bad’s “Ozymandias” (featuring all the major players) is a joy to read.

–Ben Affleck and Matt Damon are reuniting for a movie about the ex-cop who reportedly rigged McDonald’s Monopoly game to win $24 million.

-At the TCAs today, Fox announced not one, but two 24 spinoffs: a prequel about origins of Jack Bauer and one set in the legal world with the clock ticking down 24 hours until a prisoner’s execution. They also teased the likely return of Prison Break.

-Fox also announced that Justin Timberlake and Dax Shepard will team up to produce the game show Spin the Wheel, which will offer what the network says will be one of the biggest prizes in primetime history: a chance to take home more than $20 million in cash per episode.

-According to court docs, Johnny Depp once accused his ex Amber Heard of punching him in the face while he was lying in bed reading.

-A new wave of unkempt, unruly fashion dudes is on the rise. Oh goodie.

-Moonlight director Barry Jenkins dropped the trailer for his follow up film, If Beale Street Could Talk.

[Note: I’m off for a few days. Will be back to blogging mid-next week!]

-The trailer for Netflix’s Nappily Ever After looks great (though I can’t see Sanaa Lathan without thinking of her biting Beyonce.)

Diane Kruger and Norman Reedus Are Having a Baby

Courteney Cox and Ed Sheeran Dance It Out