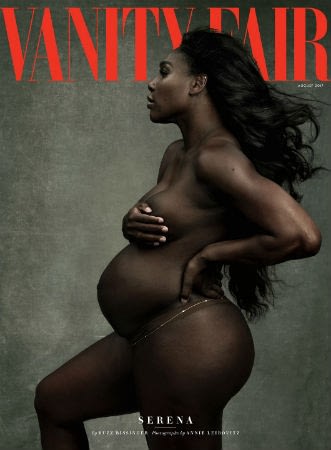 –Serena Williams and her belly bump look amazing on the cover of Vanity Fair, where she talked about how fast her life changed. “If you would have told me last year in October or November that I would have a baby, not be pregnant but have a baby, I would have thought you were the biggest liar in the world.” She also talks about finding her partner Alex Ohanian, and it was a total rom-com meet-cute.

–Mariah Carey upgraded her infamous “I don’t know who that is” when talking about her ex, James Packer, and it was glorious.

–Justin Trudeau hung out with the cast of X Men in Montreal. James McAvoy fanboying is a wonderful thing.

-This is a fascinating inside story of how TMZ quietly became America’s most potent pro-Trump media outlet. Between this and Us Weekly’s new slant, it’s hard out there for a gossip lover.

–Ryan Reynolds once saved his nephew’s life because he had taken a baby CPR course.

-Congrats to The Flash’s Danielle Panabaker, who just got married.

-I stopped watching Pretty Little Liars in the first season and tried to catch up before tonight’s finale by reading this list of all the ridiculous things the show has done. Someone was drugged at the dentist and woke up to find a note hidden in her tooth?!? I should have never quit.

-Glee’s Chris Colfer claims he was visited by an alien, who was insanely cute.

-I really liked this interview with TV’s best music supervisors about how they picked their Emmy submissions.

–Robert Pattinson plans a heist in the trailer for Good Time. The accent is tripping me up, but critics at Cannes went crazy for his performance in this.