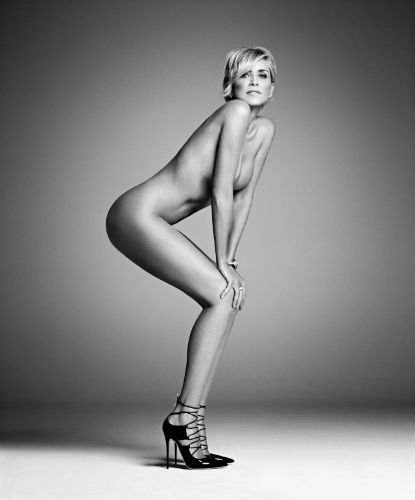 –Sharon Stone‘s Harper’s Bazaar interview is spun gold flecked with perfection and doused in awesome. She holds nothing back, whether she’s talking about guest-starring on SVU (“I’m like, ‘This is so bad. What did I do to deserve this?'”) to her inability to find a date to the fact that she thinks her “ass looks like a bag of flapjacks.” The accompanying photo shoot proves otherwise…

-Is Britney back, (bitch)? There’s a lot of talk this week about Britney Spears‘ resurrection. This certainly is the best dancing we’ve seen in years.

-Meanwhile, in her Marie Claire cover story, Miley spoke about the many, many ways growing up as a Disney star messed her up. “I was made to look like someone that I wasn’t, which probably caused some body dysmorphia because I had been made pretty every day for so long, and then when I wasn’t on that show, it was like, ‘Who the fuck am I?'”

-She also talked about her budding friendship with Caitlyn Jenner.

-This Rose McGowan profile makes me want to join her official fan club and/or carve a sculpture in her honour.

-This is an interesting article on True Detective’s possible future. Despite season 2 being hated by critics and audiences, HBO isn’t exactly known for admitting defeat and they need a lot more programming then they used to feed the beast, so I wouldn’t be surprised to see a renewal. I’m guessing they’ll somehow put a leash on Nic Pizzolatto, though.

-I would like to live inside Jennifer Aniston and Justin Theroux’s honeymoon.

–Joshua Jackson amused himself on a flight last night by tweeting about the Mighty Ducks. Marry me.

–Nicolle Wallace says ABC gave her zero feedback before firing her from The View.

-I kind of love that all the Modern Family kids turn to Julie Bowen whenever they need life advice.

–Amy Schumer crashed a wedding reception in Dublin and participated in a singalong because she’s a perfect human being.

-Hollywood Reporter’s post-TCA advice for TV networks is so on point. My favourite bit: “If the show doesn’t start strong and then bloom in the next two or three [episodes], that’s pretty much it. Asking me to come back later because “the ninth episode is our best yet” is completely misunderstanding how normal people watch television.” Preach!

-Speaking of Buzzfeed quizzes, Armie Hammer and Henry Cavill’s response to “never have I ever been in handcuffs” is priceless.

-In other Buzzfeed news, they do an amazing job breaking down what it means that Beyonce wore a weave on her Vogue cover. (Spoiler alert: nothing.)

–Khloe Kardashian took a private jet to Chipotle, which is exactly what I would do in her position. #LifeGoals

-Everyone is reworking their box office predictions for the weekend after Straight Outta Compton had a HUGE Friday.

-Wait. How did this (accidentally NSFW) Mockingjay poster ever get through the approval process? Like, ever.

-ABC recruited a bunch of their stars to appear in their new Muppets promo, including Kerry Washington and Nathan Fillion.

Amy Poehler: “I have the Angelina Jolie of vaginas”