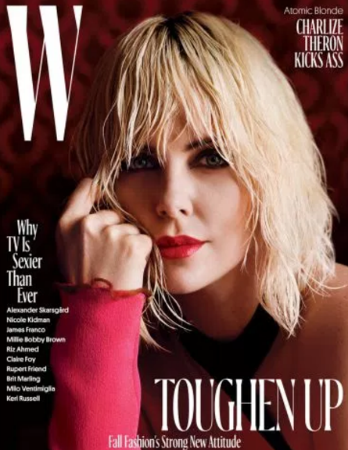 –Charlize Theron previews her ass-kicking role in Atomic Blonde in the new issue of W. She talks about the only bar fight she’s ever been in, accidentally punching Teri Hatcher in the face, and getting injured on set.

-There’s a lot of talk today about the scorched-earth interview T.J. Miller gave THR in the wake of his last episode of Silicon Valley. He’s way not enough of a household name to have this kind of attitude. He comes off terribly, takes a few swipes at costar Thomas Middleditch and burns a ton of bridges. Fargo’s Allison Tolman made a good point on Twitter: what would have the response been if an actress made those types of comments? Katherine Heigl was crucified for much less.

–Beyoncé and Jay Z’s twins have finally left the hospital.

–Brad Pitt is probably not dating Sienna Miller or Elle McPherson. What other attractive, age appropriate blonde can we throw at him?

–Courteney Cox says she’s given up on fillers. Hallelujah!

-Meanwhile, Chris Brown and Migos reportedly had an altercation after the BET Awards.

-China’s box office rescued Transformers from disaster, continuing a trend of bailouts. The robots-in-disguise sequel collected $69 million in the U.S., a franchise low, but hit $123 million in China, a franchise high there.

-War for the Planet of the Apes is getting really good reviews. Like really, really good. Huh.

-Now that Netflix has started cancelling shows, they just can’t stop. Girlboss is the latest casualty.

-One of Johnny Depp‘s former manager backs up Amber Heard’s accusations against the actor. Well, if a man says it happens I guess everyone can believe her now, right?

-Here are more details about what really went down in the Hans Solo movie. An interesting tidbit: Lucasfilm decided to bring in an acting coach for Alden Ehrenreich when they were not entirely satisfied with the performance (acting coaches are not unusual — bringing one in that late into production is.)

-Gossip Girl alum Penn Badgley will star in Lifetime’s adaptation of Caroline Kepnes‘ You. Oh, this is GOOD casting. He can play creepy yet strangely sympathetic well. Of course, this adaptation is going to live or die by who they cast as the female lead.

-Meanwhile, Penn Badgley and Domino Kirke celebrated their new marriage with another wedding.

-The new season of The Good Place will have a clam chowder fountain, which kind of sounds lovely.

-The writers for the new season of X Files have been revealed: Darin Morgan is back, but sadly no Vince Gilligan and Frank Spotnitz — and no women! Come on.

-The Bellas take their show on the road in first trailer for Pitch Perfect 3.