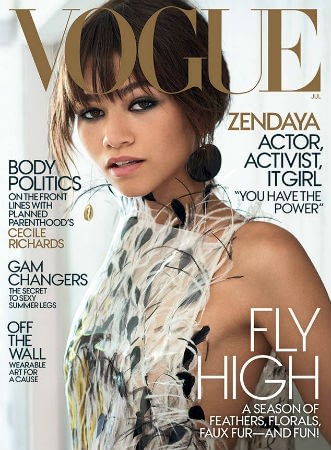 –Zendaya looks stunning on the cover of Vogue’s July issue, in which she talks about making demands to Disney execs when she was only 16, and learning trapeze for her new movie.

-THR’s TV Comedy Actress roundtable features Emmy Rossum, Issa Rae, America Ferrera, Pamela Adlon, Minnie Driver, and Katherine Hahn. Among the best bits: Rossum says William H. Macy supported her most during her equal pay fight, Adlon remembered having a similar battle on Californication, Driver talked about directors building ditches for her to stand in when kissing shorter costars instead of just making the actor stand on an apple box, and Hahn talked about always getting typecast as the BFF and pitched a Rosencrantz and Guildenstern-type movie where she and Judy Greer are the leads, and every so often you see Kate Hudson running around in the background. (I would watch that.)

–Beyonce might be having her twins right now and the internet is melting down.

–Jessica Chastain would like everyone to stop looking at her wedding photos, which were taken by paps in a helicopter. Fair enough (though I’ll be interested to see if she shares them herself eventually, or sells them to a pub).

-I posted a few days ago about Jake Johnson‘s awesome story about Tom Cruise being the nicest guy ever. Here are 18 more.

-On the flip side, did he have too much say in The Mummy script?

–Elizabeth Banks really stepped in it yesterday when she used an acceptance speech to call out legendary director Steven Spielberg for failing to make female-lead films. Shari Belafonte pointed out The Color Purple, but Banks simply “moved on.” This white feminism bullshit is getting worse.

-Update: Elizabeth tweeted an apology. She’s a producer and a director now; lets hope she learns from this and hires all types of women for her next projects.

-Speaking of famous white women being woke-light, the NYT profile on Katy Perry did her no favours. The writer calls her out repeatedly, saying “in our interview, she proclaimed herself devoted to dialogue but spoke in a near uninterrupted monologue.” It’s like when DeRay Mckesson asked her about cultural appropriation during her live-stream and she talked for two minutes straight but never actually apologized.

-This is depressing: the Cosby jury is deadlocked. They deliberated for 30 hours over 4 days before telling the judge they couldn’t reach a verdict. He’s ordered them back for more deliberations.

–Rebel Wilson won her defamation case against a magazine publisher: “I had to stand up to a bully.”

-I can’t believe I somehow missed this last week: Tobey Maguire and ex-wife Jennifer Meyer attended their daughter’s school production of Beauty & the Beast, and all their A-list friends came, including Leonardo DiCaprio (with his wolf pack), Courteney Cox and Gwyneth Paltrow. I bet the other kids felt like crap when only their grandparents showed up for them.

-The Wolf Pack has moved on to NYC and picked up Orlando Bloom.

–Gwyneth Paltrow says she’s moving away from acting to focus on Goop. So I guess I’m moving towards ridiculing her full time.

–DeMario Jackson broke his silence over those Bachelor In Paradise allegations, saying “my character has been assassinated.”

-Also, this article on drunken hook-ups on reality TV is unnerving. “There are implied incentives available to cast members who are down to fool around.”

–Ryan Seacrest is on the cover of THR with the crazy story of the secret, heated negotiations to bring him back to the rebooted American Idol. After blowing the record-breaking $25 million to hire Katy Perry, producers went back to Seacrest with half of their original offer and things got tense.

-I really like both Chrissy Teigen and Colton Haynes, but these interviews are way too TMI.

–Josh Brolin is getting seriously buff for Deadpool 2.

-How the hell is Johnny Depp still getting handed first-look deals? How many bombs is he going to have to have before Hollywood moves on?

–Elle Macpherson has split from her billionaire husband.

-National treasure Diane Keaton candidly listed the celebs she is and isn’t friends with.

-I watched The Leftovers series finale a week ago and avoided articles/podcasts up until now because I wanted to have time to digest it. (I’ve changed my mind three times since then about whether or not I believe Nora’s story, but I’m holding firm in my first impression that it was a near-perfect finale.) Now that I’m looking up what was written about it, I’m astounded by Vulture’s deep dive. Their writer was basically embedded with the show for months to create this feature. It verges a little into ‘how the sausage is made’ territory, but even if you’ve never seen the show, this is a great read for anyone interested in how TV works.

-Rough Night is only at 55% on Rotten Tomatoes, but it got good reviews from two critics I usually agree with, so that’s promising.

-This is an interesting look at how much Netflix is paying for new TV shows (word is that they’re investing $4 per subscriber on original content.) Basically, they “must spend like a drunken sailor to compete with TV networks.”

-Do NOT put Lindsay Lohan and Jane Austen in the same headline, People! Don’t you effing dare!

–Aisha Tyler emotionally announced on today’s show that she’s leaving The Talk: “I just realized I had to let something go”. Can’t say I’m surprised. She’s at Seacrest-levels of work, with Criminal Minds, Whose Line Is It Anyway?, Archer, her podcast, her cocktail company and hitting the festival circuit with her directorial debut. I don’t even know if I’ve ever watched an episode of The Talk but when she started sob-heaving in that clip I got teary.