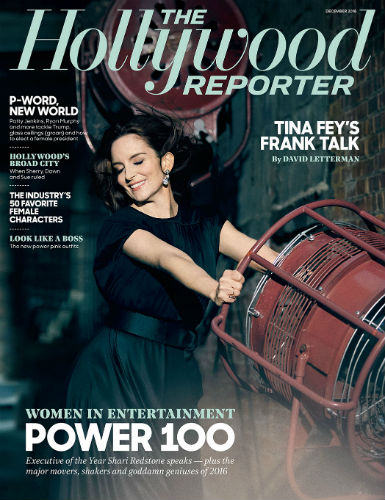 –Tina Fey was interviewed by David Letterman for the latest issue of THR and it’s great. She talks about her fear of artists becoming Leni Riefenstahl, offers her take on Donald Trump getting into a Twitter war with Alec Baldwin (“You think you’re good at being a jerk on Twitter? You will now face the grandmaster of being a jerk on Twitter”), and reveals she’s in a daily group chat with Maya Rudolph, Emily Spivey, Paula Pell, Amy Poehler, Ana Gasteyer, and Rachel Dratch.

-I still fall in the ‘what is a Bella Hadid?’ camp, but this is a pretty boss cover.

-Forbes identified the 10 most overpaid actors of 2016, and Johnny Depp topped the list for the second year in a row. Also, it *tickles* me that Leonardo DiCaprio landed at #8.

-This is an interesting take on why the Casey Affleck sexual-harassment allegations just won’t stick.

–Russell Crowe won’t be charged over that bizarre confrontation with Azealia Banks.

–Katie Holmes shut down Dawsons Creek’s reunion chances. Um, because she has so much other stuff going on?!

–Rihanna denied dissing Beyonce after not getting a Grammys nomination for Album of the Year, saying “We don’t need to be putting black women against each other.”

–John Legend and Chrissy Teigen are really good at charades. And life.

-Jesus cripes. A new “right-to-live” lawsuit on behalf of Sofia Vergara‘s fertilized eggs (“Emma” and “Isabella” ) has been filed in Louisiana by ex-husband Nick Loeb. How can this possibly be a thing?!

–Reese Witherspoon is confused by Westworld.

–Ryan Murphy says he now regrets that he directed the People v. O.J.’s Marcia Clark episode instead of hiring a woman to do it. I have my issues with him, but it’s good of him to admit this.

-I really liked this piece on how memorizing the Hamilton soundtrack before you see it can actually improve your enjoyment (which leads into a discussion about spoilers in general).

-I knew (KNEW!) there’d be a backlash against the pure joy of La La Land because people are predictable monsters. But I didn’t think I’d first see it on Jezebel.

-Random: Minka Kelly is reportedly dating HIMYM’s Josh Radnor. On the plus side, she’s not dating Sean Penn.

–Matthew McConaughey pet a real tiger for his new movie and lived to tell the tale.

-Pretend you’re actually at a Childish Gambino concert with his VR video for “Me and Your Mama”.

-The CW, which doesn’t cancel anything, just cancelled Reign.

-The new trailer for 50 Shades Darker is as ridiculous as you’d expect.

Bridgerton Is Coming Back