I've written about how Taylor Swift has adopted a posture of victim to benefit her entire decade-long career https://t.co/6fU9UosJPq pic.twitter.com/4ISeN2xGfV

–This Buzzfeed article is a very, very good read about Taylor Swift‘s penchant for victimhood.  I particularly like the parts about her appropriating feminism when it suits her needs, and using Kanye West to frame herself as fragile white victim. It’s interesting that this is the second article I’ve read this month pushing back against Swift’s fake sisterhood.

–Ben Affleck won’t direct The Batman, but it sounds like it has more to do with him rethinking his approach to movies after Live By Night’s failure, instead of the WB trying to muscle him out.

–Sienna Miller opens about her partying days in a new interview with Love saying “It was hurtful to my career.” She added, “I grew up in the ’90s watching everyone getting away with what they got away with. I was like, Oh, the Gallaghers [did it], f**k it.”

-I liked this article on how the CW mastered the superhero rom-com.

-Also, Supergirl just cast Teri Hatcher as this season’s big bad. I love that her and Dean Cain are on the same show again.

-Speaking of CW superheroes, Crazy Ex-Girlfriend’s Rachel Bloom wrote a song Grant Gustin and Melissa Benoist will perform in The Flash/Supergirl musical ep! It will also feature a song by the guys who wrote La La Land’s “City of Stars.” I want to watch this thing NOW.

-Also, Crazy Ex Girlfriend released an extended version of the period sex song and it makes it clear why only two lines made it onto TV.

–Nicole Kidman is just 12 years older than Jason Momoa and she might be playing his mother in Aquaman. Oh, Hollywood.

-After 18 years together, David and Victoria Beckham renewed their marriage vows. (This time without matching purple outfits, sadly.)

–Ellen DeGeneres tried to seduce Jamie Dornan with office supplies and it was more entertaining than 50 Shades Darker is sure to be.

-Parenthood’s Jason Katims is teaming up with a Hamilton producer for a new NBC high school drama so we should probably just start crying now.

-It’s nice that Dev Patel and Andrew Garfield were disappointed by the lack of sex scenes in Moonlight (though I’m not sure that was the point of that movie).

-Also, Andrew is teasing us again by saying he’d take Emma Stone to a desert island if he could only choose one person.

-In Kesha’s new countersuit she says “You can get a divorce from an abusive spouse,” so an artist should have the same opportunity.

–Timothy Olyphant says someone once took photos of him without him knowing it in a locker room. For the good of 2017, we’re gonna need to see those pics.

-New Making a Murderer episodes will debut this year. I wonder if everyone will be as receptive to it in these depressing times?

–Paris Jackson is going to try her hand at acting.

-More proof that Rob Lowe probably deserved being mocked by his West Wing costars yesterday: check out the job listing for his assistant.

-The first full trailer for Beauty and the Beast is here and damn if hearing “Tales as Old as Time” didn’t get me excited. 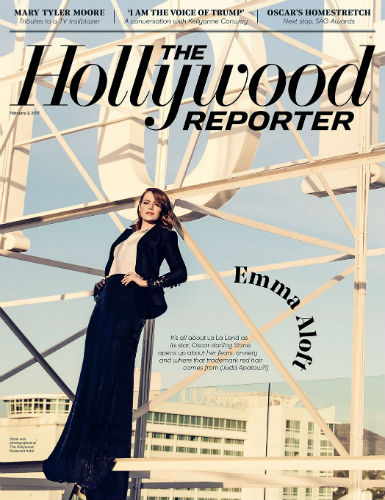 –Emma Stone managed to out-awkward Jennifer Lawrence during her adorable SAG speech last night. She’s also on the new THR cover, talking about her debilitating shyness and her Oscar campaigning: “I’m not complaining because I love this film — it’s fun to talk about it — but I’ve been doing interviews about this movie for almost six months.”And if you need yet another reason to lover her, she also revealed that her two best friends are Canadian. (“One’s from Prince Edward Island and the other from Scarborough.”)

-There weren’t too many showstopper dresses last night, but I dug Thandie Newton’s and Michelle Williams’.

-One of my favourite things about last night’s SAG Awards (besides the supercharged speeches) was watching all the megastars gush over the Stranger Things kids.

-Speaking of the speeches, everyone focused on Winona Ryder‘s (admittedly hilarious) reaction faces, but that entire speech was a barn-burner.

-So Kevin Spacey was once again accompanied to an award show by Evan from pop duo Evan & Jaron.

-This weekend’s SAGs and PGAs gave big Oscar boosts to Hidden Figures and La La Land (but not so much for Moonlight and Manchester by the Sea).

-Goodness. Now Mischa Barton is saying she was hospitalized last week because someone slipped her GHB at her birthday party.

–Kal Penn responded to a racist troll by raising over a 1/2 million dollars for refugees.

-Congrats to Evan Rachel Wood, who’s engaged to her bandmate.

-Nice: Gina Rodriguez just inked an overall deal with CBS. She deserves to be a giant star.

–Emma Watson and Miles Teller are reportedly pissed they didn’t do La La Land, as was originally planned.

-Just in case you were wondering, Viggo Mortensen smells like tea, wisdom, beef jerky, and berries.

–Selena Gomez made her relationship with The Weeknd Instagram official by posting photos from their Italian vacation.

-This got a little lost in the weekend shuffle but I really urge you to read this account of the conversation at a lunch celebrating women in film at Sundance. Salma Hayek is so incredibly dismissive of Jessica Williams and the experiences of black women. This is white feminism at its worst. Williams was incredibly composed (though she later explained on Twitter “the ‘composure’ literally was just me shutting down after someone called me an angry black woman.”)

–Ruth Negga shows us how to make an Irish coffee. I like the Cougar Town pour she’s got going on…

–Timothy Olyphant is dismissing rumours that he auditioned to play Negan on The Walking Dead.

–Samantha Bee is planning to host her own correspondents’ dinner on the same night as the White House one. Guess which one I’d rather watch?

-Say what you will about Nicolas Cage, but this was pretty swell of him.

-Congrats to Felicia Day, who welcomed a daughter she adorably named Calliope Maeve.

–Kim Cattrall sounds pretty skeptical about all those Sex and the City 3 movie rumours.

-Fork yeah! The Good Place has been renewed for a 13-episode second season! It’s ratings aren’t stellar but the finale did such a good job of setting up another season that it would be a shame if it wasn’t renewed.

-Everyone at Sundance is raving about Call Me By Your Name. Here’s the first clip (Armie Hammer‘s shorts have already sold me).

–Dakota Fanning takes on a dangerous preacher in the Brimstone trailer.

–Paula Patton and Robin Thicke‘s messy custody battle just got even messier. Yesterday they both requested temporary sole custody of their son, but Thicke’s request was not only denied, the judge issued a temporary domestic violence restraining order against him amidst allegations of physical abuse.

-Well, this isn’t good: Mischa Barton has been “voluntarily transported to a hospital for mental evaluation” after sources tell TMZ she was “she was hanging over her backyard fence in West Hollywood and rambling about her mom being a witch” yesterday.

–Jon Hamm continues to eschew underwear, to the joy and delight of the world. Happy weekend!

-Meanwhile, did Don Draper really change for the better at the end of Mad Men? Jon Hamm doesn’t think so. “I don’t think that zen moment of understanding of anything really stuck. That leopard is not changing his spots…I think it was more about, he just had a really good idea for a commercial.”

–Jake Gyllenhaal is questioning the lack of Oscars love for Ryan Reynolds’ “extraordinary” work in Deadpool.  You’d think he would have bemoaned his Nocturnal Animals costar Amy Adams‘ snub instead, but sure.

-Um, is Drake angling to be a late-night talk show host? On a podcast, he said “I miss Johnny Carson and the appeal of that sexy late-night TV that’s funny.” Simmer down, Wheelchair Jimmy!

-I watched the Riverdale premiere last night and I’m still not sure if I liked it or not. On the plus side, I discovered that Netflix Canada streams new eps the next day (along with a bunch of other CW shows like Jane The Virgin and The 100).

-Speaking of shows you should stream on Netflix, I really like this description of Crazyhead: it takes the Buffy recipe and makes it dirtier and hornier.

–Ben Affleck’s “Live By Night” flop resulted in a $75 million loss. And yet he’s still going to have no problem green-lighting movies because Hollywood!

-God bless The Walking Dead stars for trying so hard to talk up this season.

-Here’s the first trailer for In Dubious Battle starring James Franco and Selena Gomez. I saw this at TIFF and it was ok.