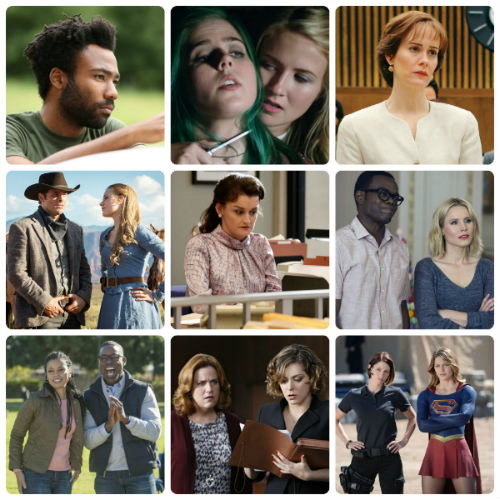 We are officially living in Peak TV Land, with 455 scripted shows competing for our attention in 2016 (the most ever). And yet, this year felt like one of the most uneven TV seasons in a while. There was so much TV but most of it felt just…ok? A few were outstanding, but this was the first year I can remember in a long time when pulling together a Top 10 list would be a struggle. My BFF and fellow TV addict Nicole and I got together to chat about what we watched and loved.

Jen: I’m guessing that this is going to be at the top of every critic’s list so I’m not going out on much of a limb here, but Atlanta was such a discovery. It’s weird, rule-breaking, and so specific. I fell in love as soon as I heard “Can I measure your tree?”

Nicole: It took two or three episodes for me to fully commit to this show because I kept waiting for it to fall off and become less awesome. But Atlanta turned out to be the most consistently great show of the fall season.

Jen: Speaking of discoveries, I didn’t think I’d like The People v. O.J. Simpson because I lived through that case (yeah, I’m that old), but man, was that an engrossing limited series. I was visiting my brother and we binged 5 episodes in a weekend.

Nicole: We’re going to fight about this but I love Westworld!! It’s so weird but completely engrossing. It’s the kind of show that drives me to Vulture to read theories on Monday mornings. Jeffrey Wright and James Marsden shine and where in the heck has Thandie Newton been? The ensemble cast really works for me and the feminist overtones are so refreshing (on HBO no less!). This interview by REW crushed me.

Jen: Yeah, I can’t get on board with you for this one. The more I watch and write about TV, the more I realize I don’t give a crap about plot; I just care about how characters to react to it. That’s why I’ll stick with a show in which I have no idea what’s happening but I’m invested in the characters (i.e. Orphan Black). I tried with Westworld but it feels like one of those shows that prioritize twists over character.

In non-cable series, the under-the-radar show that completely took me by surprise was MTV’s Sweet/Vicious. It’s about a college that’s turning a blind eye to its date rape problem, so two female students learn how to fight, dress up in ski masks, and kick the crap out of the perps. It’s like Veronica Mars, if Veronica was a kick-ass vigilante instead of a P.I., and there were two of her.

Nicole: I can’t believe you haven’t mentioned The Good Place yet. It may turn into appointment viewing when it returns because I love it so much. So funny and absurd!

Jen: I like The Good Place, too. It’s one of those new shows that isn’t perfect, but has enough potential to keep me watching. That also includes Pitch, Insecure, Better Things, and This Is Us. (Seriously though, if Kate on This Is Us doesn’t get at least *one* defining character trait beyond her weight, I’m bailing soon.)

Nicole: Although I appreciated what You’re The Worst tackled last year, I found this year’s storyline a lot lighter and more enjoyable. Season one remains my favourite but this season was next best for me. Maybe it’s because they brought back Sunday Funday. I ended up watching the YTW and Crazy Ex-Girlfriend abortion episodes the same week and although both were really different, I thought it was amazing how the two stories were treated. I like that the writers are humanizing a tough topic.

Jen: YTW was a bit uneven this year but I agree about Crazy Ex-Girlfriend; it has somehow gotten even better now that they’ve dropped the love triangle nonsense and leaned into the female dynamics. Like Atlanta, it’s so specific and does such a good job of world-building. The recent Spice Girls spoof about #squadgoals slayed me (“all citizens must watch Hocus Pocus”).

Nicole: Let’s not forget that Game of Thrones was good again!  They brought back Jon Snow and it was 70% less rapey.

Jen: I was on the verge of giving up Game of Thrones, but this might have been my favourite season yet. They sped up the pace, characters actually crossed paths, and females ruled the world. Also, I’ve liked every season of The Americans, but this one may have been my favourite yet. I’m still in shock that they’ve managed to make a teenage character not only tolerable but essential. And Martha! My god, her storyline crushed me.

Jen: I wasn’t thrilled with this season of Orange Is the New Black, but Lori Petty’s performance broke my heart into a thousand pieces. And don’t even get me started on Poussey. *sob*

Nicole: I loved anytime that Maeve was awake in the Westworld labs. Her moment on the train was magic.

Jen: I’m still not totally sold on Supergirl but I caught up on a few episodes before the big crossover and I think its move from CBS to CW worked wonders. The show seems to have finally found its footing, and Chyler Leigh’s handling of her coming out scenes was perfection.