–Angelina Jolie and her kids were spotted at the same concert as The Weeknd a week after they had dinner together, leading to renewed speculation they’re dating (even though they’re probably not).

-Speaking of hard-to-believe dating rumours, the one about Tom Cruise and Hayley Atwell has resurfaced.

-This headline makes it seem like it’s about how Kim Kardashian’s style has changed since leaving Kanye West, but it’s actually about how much he seemingly controlled what she wore.

–Millie Bobby Brown is reportedly dating Jon Bon Jovi’s son and wow this kid looks so much like his dad!

–Ariana Grande is honeymooning with Dalton Gomez in Amsterdam.

-After you’ve seen the movie, here’s a great piece on that controversial scene (which was written by director Nicole Holofcener!)

-Move over, Selena Gomez. Paris Hilton is getting her own cooking show on Netflix.

-The Hating Game is coming to theatres later this year. I know I need to temper my expectations because it likely won’t be as good as the book but I CANNOT WAIT.

-Three weeks after pleading guilty in his child endangerment case, Drake Bell has been sentenced to two years probation.

–Jodie Turner-Smith‘s jewels were stolen from her hotel room in Cannes. It’s believed she may have been targeted after wearing Gucci jewelry to her premiere. Though that jewelry was taken back after the premiere, the robbers stole jewelry worth tens of thousands of euros, including her mother’s wedding ring.

-I’m not sure I like what Bella Hadid wore to Cannes, but tree boobs are certainly one way to generate buzz.

-French actor Judith Chemla, the 37 year-old French star of Mes freres et moi, will not attend the world premiere of the film at Cannes today after she filed a complaint against the director Yohan Manca (who is also her boyfriend), alleging he threw a phone at her. Uh, maybe he’s the one who shouldn’t go?

-A spokesperson for Lea Seydoux confirmed she tested positive for COVID-19 despite being fully vaccinated and asymptomatic. She will remain in quarantine until her doctors deem her safe to travel to Cannes and attend festival events. Which should be, like, NOT before the fest is over, no?

–Vince Staples and Lil Nas X’s twitter exchange was hilarious. No one is doing socials right now better than this kid.

-Here’s another best TV of the year so far list. I would add We Are Lady Parts to this list, but I love that Girls4eva and Starstruck made it in there.

-The reviews for White Lotus, HBO’s new show that debuted last night, are glowing. It’s about wealthy people ruining the lives of various workers at a Hawaiian resort, and the cast is stacked!

-Speaking of TV reviews, the new season of Ted Lasso is getting praise (though the premiere reportedly gets off to a shaky start with a baffling storytelling decision critics aren’t allowed to spoil).

–Dwayne Johnson and Emily Blunt are in full promo mode for Jungle Fever, and this morning on GMA they surprised a custodian who got his degree in his 40s to become a teacher.

–Jessica Biel is stepping on Jessica Alba‘s turf by launching a wellness brand for kids.

-This is a good piece in the NYT about why lots of people have no plans to go back to the movies. Our theatres are opening again next week (after the longest closure in North America) and I can’t wait, but I get it.

–Jake Johnson says his new comedy indie movie Ride the Eagle is like “a sweeter companion piece” to New Girl, so I’m in.

–Matt Damon says he turned down James Cameron‘s offer of 10 percent of the Avatar profits to star in it, a payday that would have eventually totaled more than $280 million. Oopsie! 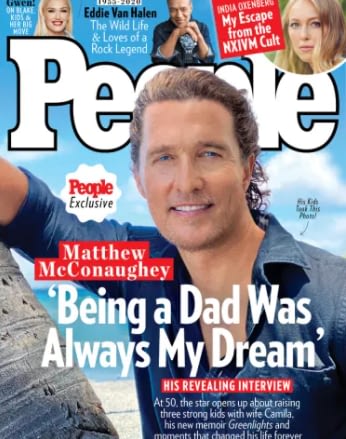 –Matthew McConaughey is promoting his new memoir, but the interviews he’s giving aren’t making me want to rush out and buy it. On parenthood, he tells People “The only thing I ever knew I wanted to be was a father. And it’s remained the pinnacle for me. Being a dad was always my only dream. I can’t think of anything being more important” and says of his marriage to Camila Alves: “I can tell you this: I’m happy and confident to say our kids do not question the love we have in our family”. Look man, ya gotta give us something more, especially because Mariah Carey just delivered such juiciness.

-I see we’re at that tedious point of the gossip cycle where every recent interview with Lily James is being combed over for clues to her relationship with Dominic West. Goodie.

-Meanwhile, West’s camp is trying to spin it that he’s just a big teddy bear who likes to get touchy-feely with his friends. Mmmhmmm.

-Despite the TV industry being awash in “un-renewals” for shows we actually want to come back, they keep reviving shows no one wants. Case in point: Dexter is coming back, with Michael C. Hall reprising the main role.

-Also, as soon as the news broke, a writer on the original series tweeted: “That time I was on a show with a male lead and I’d recommended 2 women directors for upcoming episodes and the showrunner never responded so I mentioned it again and he literally screamed at me, ‘A WOMAN WILL NEVER DIRECT THIS SHOW, OKAY?'”

-Speaking of reboots, one of the stars of the new Charmed show, Sarah Jeffery, criticized Holly Marie Combs and Rose McGowan of the original series for publicly disparaging the new version. Combs then responded and it’s, um, not great.  Meanwhile, Jeffery says Charmed OG Shannen Doherty has been nothing but kind.

-A wave of stars quit the Bon Appetit Test Kitchen earlier this year after reckoning with racism, pay disparity, and a toxic work culture. Now there’s a trailer featuring a lot of new faces.

-Meanwhile, former Test Kitchen star Sohla El-Waylly was interviewed by E. Alex Jung and the result is a scorcher of a profile.  “The fact is Brad [Leone]’s show did do very well. For some reason, people like watching a big dumb white guy. But why? What does that say about the audience? Why do you want to watch this incompetent white man when we have one in the fucking Oval Office?”

-This is a great profile on Pedro Pascal, who says to play the villain in Wonder Woman 1984 he turned his script into a pop-art scrapbook. One page features Max surrounded by text bubbles into which he wrote over and over again, ‘You are a f*cking piece of shit’.

-Here’s the first trailer for This Is Us’ two-hour season premiere, which airs Oct 27.

–Cardi B accidentally shared a topless photo on Instagram, and doesn’t seem to bothered by it: “It is what it is. S–t happens. F–k it, it’s not even the first time. I mean, I used to f—ing be a stripper so whatever. Ay, Dios mío.”

-Meanwhile, there’s talk that Cardi and Nicki Minaj are putting their beef behind them and coming together for a collab. This is the miracle 2020 needs!

-Also something we need: Ariana Grande‘s next album, which she says is coming this month.

–James Van Der Beek took to Instagram to explain why he packed up his family and moved to Texas: “In the last ten months, we’ve had two late-term pregnancy losses, each of which put @vanderkimberly in the hospital, we spent Christmas break thinking she had a tumor (the doctor was wrong, thank god), a business colleague I hired hijacked the project and stabbed me in the back, I was prematurely booted off a reality dancing show I was favored to win in front of the whole world, and my mom died.” Yeah, that’ll do it.

–Cate Blanchett interviewed her idol, photographer Gregory Crewdson, about his latest exhibit, which blends the nostalgia of an Edward Hopper painting with some of America’s thorniest issues.

–Jason Momoa is back in Toronto shooting his Apple show and I love that sightings of him are all over social.

–Tessa Thompson and Nnamdi Asomugha star in the new trailer for Amazon’s Christmas romance Sylvie’s Love. This was a huge hit at Sundance so I’m very happy it’ll be streaming instead of at theatres.