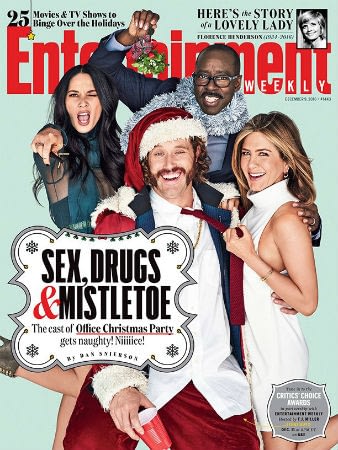 -I have a lot of thoughts about EW’s new cover photo, mostly on how I can’t believe TJ Miller nabbed the centre spot instead of Jennifer Aniston, and how embarrassed I am for Courtney B Vance…

–Kanye West is reportedly “very happy” to be out of the hospital more than a week after checking in for extreme exhaustion.

–Johnny Depp will finally pay Amber Heard’s divorce settlement. How nice of him.

-This is a really, really good piece about how we need to talk about Casey Affleck. I really want to see Manchester By The Sea, but the sexual assault allegations against him give me pause. It’s the reason I refused to see Birth of a Nation. But Nate Parker got dragged by the media, while no one’s really mentioning Affleck‘s court settlement.

–Andrew Garfield says that if he were stranding on a desert island, he’d want ex-girlfriend Emma Stone with him.

–Mariah Carey packed on the PDA with backup dancer Bryan Tanaka in Hawaii. Is this because she’s trying to get us to watch her new docuseries? ‘Cause it’s totally working!

-Lifetime is doing a Britney Spears/Justin Timberlake biopic, and the actors they cast look terrible. Which means I’m going to watch the crap out of it.

–Amy Sherman-Palladino says in the Gilmore Girls revival, Rory made all those transatlantic flights on points. That’s…not a thing.

-If Katy Perry is preggo (and I doubt she is), this is a weird ass way to announce it.

-Jurassic World 2 director Colin Trevorrow is making sure everyone knows that he’ll be putting Bryce Dallas Howard in practical footwear this time around.

–Chris Pratt is cropping Jennifer Lawrence out of all his photos, which is all kinds of hilarious.

-The full Hamilton mixtape has dropped!

–James Corden threw food at Jessica Alba and Kate Mara to see if they’d flinch. Spoiler alert: they did.

–Tom Cruise tries to convince us mummies are real in the first footage from The Mummy.