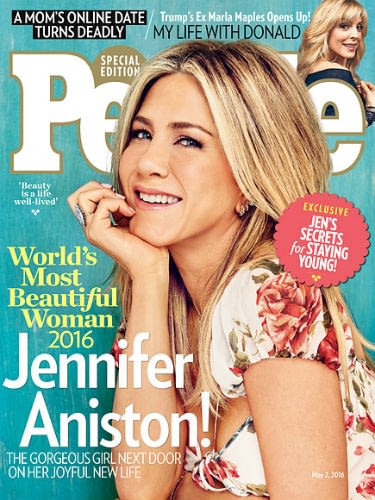 -People just bestowed the World’s Most Beautiful 2016 title on…Jennifer Aniston? Uh, fine, I guess that’s one way to promote her terrible-looking movie. Sidenote: I wonder if the ‘girl next door’ thing bugs her? She’s 47; we as a society need to collectively let that go.

-A better cover story is Julia Louis-Dreyfus on THR, in which she drops gems like “I’m playing a powerful woman who’s middle-aged and who, at least I think, is still pretty f*ckable.”

-The Live with Kelly and Michael struggle is real. Kelly Ripa is apparently “livid” after finding out that Michael Strahan was leaving the same way as everyone else, and she reportedly won’t return to the show until after he leaves. Meanwhile, he thanked her at the end of today’s show (for which she was a no-show). #TeamKelly

–Katherine Heigl is still trying to beg our forgiveness for her Grey’s Anatomy antics. Frankly, I’d rather an apology for that terrible movie where she played a cat lady who fell in love with Gerard Butler. But that’s just me.

-This whole conversation between JJ Abrams and Chris Rock is worth a read, but I’d love to know who JJ is talking about when he mentions an actress who worked on Alias who “was so, famously so, very rude to people and literally made a couple of people on the crew cry.”

-Say what you will about Gwyneth Paltrow, but at least she knows how to poke fun at her image. I laughed a lot at that video.

–Tina Fey became an Emmy voter just so she could vote for The People v. O.J. Simpson. Smart.

–Idris Elba is coming back to my TV screen and all is right with the world again.

-Speaking of TV surprises, how did I not know Olivia Coleman stars in AMC’s The Night Manager?! Why is all the promotion about Hugh Laurie instead of her? Her “with respect sir, move away from me now or I will piss in a cup and throw it at you!” remains my favourite TV insult of all time.

–Zack Synder may be a nutbar, but sometimes I think he just likes to f*ck with comic fanboys — and as someone who gets a glimpse into their minds whenever I tweet about a superhero show, I kind of approve.

-There’s a Three’s Company movie in the works because there are no new ideas anywhere.

-Wowza. Fresh Off The Boat’s Constance Wu calls Scarlett Johansson’s Ghost in the Shell casting the “practice of blackface.”

-I like this video of TV stars warning against binge-watching. Don’t be a Jerry.

-This is an insanely well-researched recap of every 30 Rock reference in the new season of Kimmy Schmidt.

–Tony Hale explains how Liza Minnelli requests a Diet Coke — and it is glorious.

–James Franco celebrated his 38th birthday at Disneyland dressed as David Bowie because of course he did.

–Stephen Amell arranged for the Stanley Cup to visit the Arrow set because he’s a rainbow-wrapped unicorn.

–Sansa and Theon brave harsh conditions in this new Game of Thrones clip.

-Meanwhile, the guys who play Theon and Ramsey proved they’re friends in real life — by smooching. Um, I’m going to need more proof, guys. Try it again, but this time take your shirts off.

–Rihanna’s savage Needed Me video is … a lot.

-Look, I still think Emily Blunt needs to gain about 30 lbs to play Rachel, but the first trailer for The Girl On the Train is still pretty damn good.