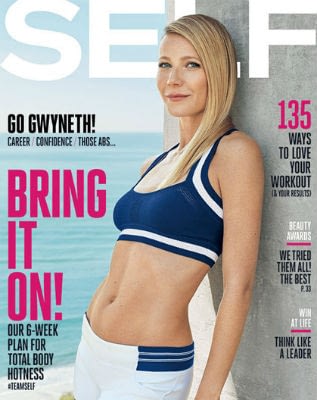 –Gwyneth Paltrow is on the new cover of Self and posted a new Q&A for GOOP,  and there’s a lot we need to unpack. In Self, she talks about how no one can seem to reconcile that she’s a businesswoman, a mother and a sexual being. “Like, ‘Gwyneth has sex? Really?’ It doesn’t seem to go together.” That’s good — self-deprecating while calling out some sexist BS. But then just when you start reconsidering your opinion of her, she tells GOOP she’d still rather smoke crack than eat spray cheese. “Hell, yes. You know, crack might be extreme, but spray cheese is not my kind of party.” Sigh. She was thisclose!

–Tatiana Maslany is getting crucified on Tumblr for her comments about a gay character being killed off of Orphan Black. Personally, I think she handled the question ok, but it’s such a no-win situation right now.

-HBO just released three more Game of Thrones clips, if you’re into that sort of thing.

–Megan Fox is pregnant with baby No. 3 and she didn’t immediately announce who the father is, which led to a morning of rampant speculation from people who seem to think her uterus is totally their business. (At least she had fun with the #NotTheFather hashtag for a while, which makes me really like her.)

-Meanwhile, Megan Fox is coming back to New Girl — which was just renewed. I’m glad — she was great on that show.

–Brooklyn Beckham and Chloe Grace Moretz are dating? That’s all kinds of cute!

-Despite rumours, Lindsay Lohan‘s rep says she is not actually engaged to a Russian heir so we can all go back to ignoring her again.

–Jeremy Renner actually said we lack “strong, badass female” roles. That’s a little rich coming from him, but his publicist deserves a win so I’ll allow it.

-Speaking of the Avengers cast, Team Captain appeared on Kimmel last night and Paul Rudd was a total charm bomb.

-This is an interesting look at HBO’s current drama problem.

-Say what you will about Ariana Grande (and I certainly have) but I love how unapologetically feminist she is.

-The Walking Dead boss swears that the season 6 finale wasn’t meant to toy with the audience.  That’s cute, guys.