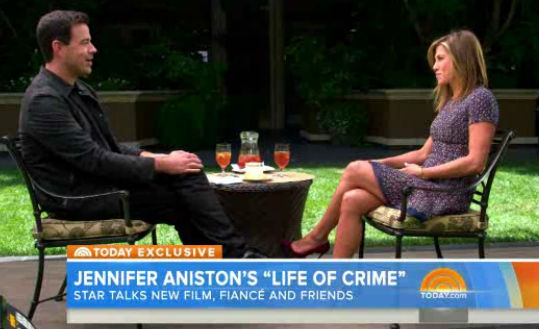 -It’s so very rare that I think “f*ck, yeah!’ when listening to Jennifer Aniston talk, but her Today interview was pretty great. “[I haven’t] failed some part of my feminism or my being a woman or my worth and my value as a woman because I haven’t birthed a child.”

–Idris Elba is sorry that his fake massive penis freaked everyone out.

-Just in case you need a good cry today: Jessica Alba‘s startup is worth nearly $1 billion.

-The Colbert Report changed its opening credits thanks to Gwen Stefani‘s Emmy screw up.

-Gwen made fun of her mistake in the star-studded singalong during Chelsea Lately’s finale last night.

-Watch the Grey’s Anatomy cast dance it out in this season 10 gag reel.

-Awww. Bryan Cranston‘s neighbors left balloons on his front gate to congratulate him on his Emmy win.

–Chloe Grace Moretz says the piracy of Kick-Ass 2 is why there won’t be a sequel. It has nothing to do with the last movie being terrible, of course.

–Prince Harry is on a cruise in the Mediterranean with his new GF Camilla Thurlow (who has the most British of all British names).

-Apparently, this Instagram post from Karrueche Tran is her apology for mocking Blue Ivy. Meanwhile, a BET producer was suspended because of it.

–French Montana and Khloe Kardashian have broken up, maybe because she found out that E! was paying him to date her.

–Drake took Nicki Minaj on a late night run to a convenience store, and for some reason there’s video of him buying her snacks.

-Also, there’s some talk that Nicki may have faked that wardrobe malfunction at the VMAs.

-I’m guessing these photos of Mariah Carey looking like a single mother are just the beginning.

49 Stars Come Together to ‘Stop the Hate’