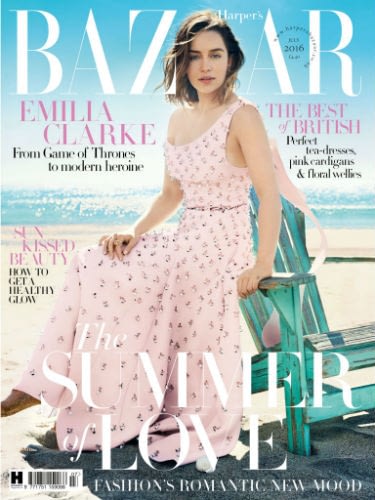 -Congrats to The Americans costars Keri Russell and Matthew Rhys, who just welcomed their first child together.

-I was on vacation last week so I was not following the Johnny Depp/Amber Heard drama too closely, but every time I looked at Twitter I was disheartened by all the Amber bashing. We don’t know what really happened, but the knee-jerk reaction of the internet to jump to a male star’s defense is weird (maybe because my gut instinct is to always give the person with bruises on her face the benefit of the doubt?). She did everything an abused woman is encouraged to do — and yet the hate is strong.

-Meanwhile, Johnny’s ex Vanessa Paradis and daughter Lily-Rose have both jumped to his defense.

-Another shocking report: Chelsea Handler may not be the easiest person to work for.

–George and Amal Clooney met Pope Francis at the Vatican because they’re fancy like that.

-‘Which costar would you ask to bail you out if arrested?’ is a really great interview question.

–BJ Novak says Mindy Kalling used to lie to him constantly on the set of The Office just for fun. I knew I liked her.

-I was really looking forward to seeing John Carney’s new movie Sing Street because I adore Once and Begin Again, but now I’m glad I haven’t gotten around to it yet after reading his comments slamming Keira Knightley. Why is he even bringing her up in interviews? They haven’t worked together for three years. Also, I saw the TIFF premiere of Begin Again with the cast/director Q&A following the film, and Adam Levine as “unpretentious” and Keira as the diva was NOT the impression I was left with.

-Congrats to Topher Grace, who married Ashley Hinshaw in a private ceremony yesterday. Wait, isn’t that the girl from True Blood?

–Dan Aykroyd loves the new Ghostbusters reboot, which is high praise seeing as the idea for Ghostbusters came from him and he remains the one who’s been trying to keep the franchise alive the hardest all this time.

-I love how Adele called people out for filming her in concert by saying “I’m really here in real life. You can enjoy it in real life, rather than through your camera.”

-The trailer for the Netflix original movie The Fundamentals Of Caring has landed — and it looks great. Paul Rudd, Selena Gomez and Jennifer “Elizabeth Bennet” Ehle. Here for it!

**NOTE: I”m on vacation for the next week so no updates until May 30th. Behave yourselves, kittens!***

-Damn Ariana Grande for continuing to do super feminist interviews and making me kinda love her. My world is askew.

-Not making nice with fellow pop stars in Demi Lovato in this new interview, in which she talks about Taylor Swift: “There are women that I don’t get along with, and that’s fine. My thing is, don’t brand yourself a feminist if you don’t do the work. I have an immense amount of respect for women like Lena Dunham…or Beyonce, who make amazing political statements through their work.”

–Kanye West went on an epic 8-minute rant about, well, everything on Ellen this week.

-Speaking of odd talk show appearances, Dax Shepard told Jimmy Kimmel a story about jerking off into a plastic cup while in traffic after getting a vasectomy. Remind me again how private he and Kristen Bell are….

-I love how a bunch of publications are tearing down the men who are butthurt about the new Ghostbusters. Esquire’s piece is my favourite mic drop. Preach!

-Super private couple Alexis Bledel and Vincent Kartheiser dared to have baby a while ago and not tell us. But how are we supposed to judge her post-baby bod now?! (Also, I have a weird story about Kartheiser from when I was an extra on a movie. It involves spaghetti. I’ve already said too much.)

-Now it makes sense why Neighbors 2 is being praised by critics for its feminist slant; Lena Dunham consulted on the script.

-Here are the new shows you’re probably going to want to avoid this fall, judging by this week’s upfront presentations.

-Speaking of the upfronts, today was the CW’s turn. Supergirl is staying on Mondays (but how much they’ll get to use Calista Flockhart remains a question), and they’ve already confirmed a Supergirl, Arrow, Flash and Legends of Tomorrow mega-crossover (ugh). Weirdly, the new show that seemed to get the critics most hyped is their Archie adaptation Riverdale, which is being compared to Twin Peaks. Here are some of the new show trailers.

-When is Kate Hudson going to stop talking about her killer body? Just give me some sort of timetable I can look forward to.

-Here’s the trailer for Kristen Stewart’s Personal Shopper, which just debuted at Cannes.