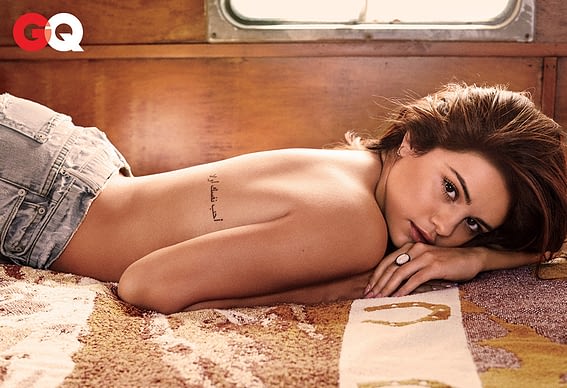 –Selena Gomez loses the makeup (and the shirt) for her new GQ photo spread, and says she refuses to publicly complain about fame. “I chose this. So I’m not gonna sit here and say, ‘Oh, my God, poor me, I didn’t have a normal childhood.'”

-Despite their pregnancy announcement, Megan Fox and Brian Austin Green‘s divorce is still moving ahead.

-Speaking of breakups, let’s pour one out for Kirsten Dunst and Garrett Hedlund, who split after four years together.

–Lindsay Lohan roped her parents into her big engagement tease. Such a sweet family moment.

-This Vulture interview with all the kids from ABC comedies is adorable — but also kind of depressing because they already sound more mature than me.

–Robert De Niro spewed a lot of thoroughly debunked anti-vaccination nonsense in a crazy new interview on the Today Show.

-Also, her wanting to sit next to Idris Elba is making her even more relatable to me.

-So the 21 Jump Street /Men In Black crossover is actually happening? For realsies?

–Aziz Ansari and Eric Wareheim are shooting Master of None in Rome and took a break to make a hilarious music video set to Kanye’s “Famous.”

-On the Tonight Show, Amy Schumer experimented with some new ways to sit in the interview chair, and talked about her boyfriend’s mother’s inability to say “no comment.”

–Matt LeBlanc is reportedly at war with his Top Gear cohost. So, not Friends then?

-I’m not feeling Margot Robbie’s oversized blazer here, but she’s promoting Tarzan so I guess she’s allowed to totally give up at this point.

–Ben Affleck will officially direct and write an upcoming standalone Batman film — but will he be able to overcome the age issue?

-I really liked Vulture’s exploration of what the hell Girls is doing to Hannah’s character. That show doesn’t get a lot of attention anymore, but it’s having a stellar season.

-The Doctor Strange trailer has arrived. I’m hoping my love for Rachel McAdams and Tilda Swinton will overshadow my ambivalence for Benedict Cumberbatch. Also, guess how many Asians there are in this trailer about a guy going to Asia to learn Asian mystical arts? Yeah.