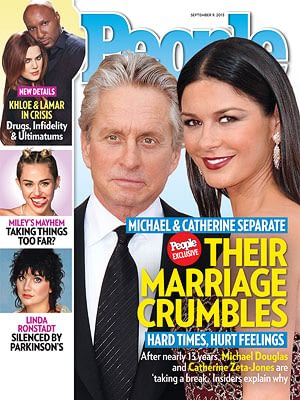 -I’m sad that the rumours about Michael Douglas and Catherine Zeta-Jones appear to be true. They survived so much crap, but I guess there’s no coming back once your husband tells the world he got cancer from having sex with you.

–Katie Holmes and Jamie Foxx were once spotted in the same room so now everything thinks they’re banging.  (“Are people still saying bang?”)

-The early reviews for Gravity are pretty damn glowing.

-Meanwhile, Sandra Bullock looked a-mah-zing in Venice today (love the dress and the pale lips, didn’t love the premiere dress she wore later). The press conference seemed fun too. When asked how he approached the film’s physical challenges, George Clooney said “I mostly just drank.” (I’ve been to a press conference with him and they’re basically just stand-up routines — fun to attend, not so fun to write up.)

-It’s been a big week for Joe Fatone. He reunited with ‘N Sync and then he has to contend with false rumours that he left his wife.

-The proposed Luther movie will reportedly be a prequel to the series. No Alice? No point.

-The new promo for Glee features every character except the one the world wants to see.

–Lamar Odom has reportedly returned home to Khloe Kardashian after a few days off the grid.

-Barely a month after his Loch Ness monster mission failed, Charlie Sheen is back on the hunt for crazy mythological creatures. This time, it’s a half-otter man. (Weirdly, I actually think this is a great use of his free time.)

–Miley Cyrus is recording an edgy, top-secret remix of “Black Skinhead” with Kanye West because she’s an edgy rebel filled with edginess. Oh, and just in case you missed the memo: she’s edgy now.

-Meanwhile, a duet between Justin Bieber and Miley Cyrus has leaked. It’s called — what else? — “Twerk.”

–Miley “couldn’t have been happier” about her VMA performance. So at least one person in the world isn’t experiencing PTSD like the rest of us.

-As angry as you may be to learn that the word “twerking” has been added to the Oxford English Dictionary, this video of Morgan Freeman reading the definition is pretty damn great.

-I don’t watch CSI because, you know, I have taste — but the story about George Eads getting the boot after getting into a heated fight with a pregnant show writer is juicy stuff.

–Justin Bieber is spending his downtime getting inked and playing with sharks.

-Even the guy in the background of this photo doesn’t understand why Olivia Munn is wearing an outfit that’s two sizes too small.

-This is perfection: what if last week’s Breaking Bad played out entirely on Facebook?

-Meanwhile, BB’s Aaron Paul is ready to play with the big boys. He’s in talks to star in Ridley Scott’s Exodus.

–Octavia Spencer is caught up in a lawsuit with a weight-loss company she was endorsing, who are angry that she made clear that all of her sponsored tweets were, you know, sponsored.

-The new Divergent featurette does a really good job of setting up the movie for non-book readers.

Is There An Emma Stone Sex Tape Out There?