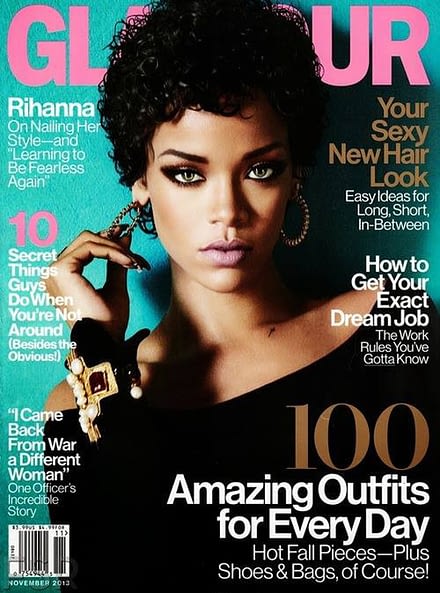 -I’m really digging Rihanna’s hair on the cover of Glamour. Could have done without seeing her nipple in her new music video, though.

–Miley Cyrus says she just wants to have fun and “not think about any kind of repercussion.” One of those repercussions, however, is not an unplanned pregnancy. She’s laughing off rumours that she’s carrying Juicy J’s baby.

-Speaking of babies, a very non-pregnant Jennifer Aniston has emerged after weeks of belly bump speculation.

-In case you missed Tina Fey‘s episode of SNL, her Girls spoof was killer.

-Are Cameron Diaz and Benicio Del Toro hooking up? I don’t hate that idea.

–Kate Upton and Maksim Chmerkovskiy are trying to convince us that they’re “very serious” about their relationship, even though it’s only 0.0043 seconds old.

-Is Ashley Greene engaged to Liam Hemsworth’s BFF — or does she just want us to think she is?

-Even more exciting than the rumoured Jennifer Lawrence cameo, Billy in 4C is coming back for the Dumb and Dumber sequel!

-Who gave Jennifer Hudson permission to spoof Kerry Washington in Scandal? Even if it is for a PSA, she’s pretty terrible in it.

-Dammit if I don’t like Katy Perry’s new song!

–Scarlett Johansson talks about her fear of peeing in the middle of her Broadway show in the new issue of Interview.

–Kanye West was actually nice to some paparazzi, telling French photogs: “I understand you have to make a living.”

–Bradley Cooper and girlfriend Suki Waterhouse are still going strong; I’m still freaked out by how young she looks next to him.

–Amanda Bynes has moved from UCLA to a more posh rehab facility in Malibu.

-A new clip from Gravity has surfaced. It’s just a little over one minute long and already I’m sweating. This movie might actually kill me.

-Not surprisingly, the Breaking Bad finale pulled in ginormous ratings with 10.3 million viewers. (For perspective, last year’s finale earned 1.9 million viewers — and that was considered good.)  Also, it was also downloaded 500k times in 12 hours. Surprisingly, Homeland also came back to its best ratings ever. Revenge, Once Upon a Time, and The Good Wife all returned to low numbers.

–Bryan Cranston and Aaron Paul discuss the show’s ending in this new interview, and creator Vince Gilligan explains himself.

-Speaking of the finale, here’s our final Breaking Bad podcast ever. Sigh.

–Rihanna says she’s a square who rarely has sex, contradicting everything we’ve ever learned from her Instagram feed.

-Speaking of Rihanna, she started her concert in Adelaide last night 90 minutes late, and the crowd was not thrilled.

-Has Gwen Stefani actually confirmed her pregnancy? Everyone’s talking about her visible belly bump in this photo, but I don’t see it.

–Taylor Swift and Katie Holmes are starring in a movie alongside Meryl Streep? What world is this?!

-While promoting her SNL hosting gig, Tina Fey made fun of her Emmy nip slip on Fallon last night.

-Speaking of SNL, set your DVR for it to tape 30 mins longer so you can catch Arcade Fire’s concert special.

-The cast of Sesame Street are having a big week on late night talk shows. First up was the theme song on Jimmy Fallon, and then last night Big Bird and Oscar went head-to-head on The Colbert Report.

-Speaking of late night talk shows, I’m really hoping the Jimmy Kimmel vs. Kanye West feud is real, because it’s the best! Kimmel made a spoof of Kanye’s latest ridiculous interview (which, if you haven’t seen the original, is totally worth a watch), and Kanye lost his sh*t.

-Speaking of Kanye West losing his sh*t, he exploded on a paparazzo this morning.

-I’m not loving the news that they’re adapting Fargo for TV, but casting Martin Freeman in the William H. Macy role softens the blow a bit.

-Mark your calendars! The christening of Prince George will take place on Oct. 23rd.

–Britney Spears previewed a 15-second clip from her “Work B*tch” music video. I kind of dig that song. I mean, not that I want to listen to it at work or anything, but when it comes on in the club, it’s on!

-God bless Emily M. Keeler for posting the full transcript of her interview with David Gilmour.

-It was a bad night for the ratings of returning shows. Parenthood, Glee, Grey’s Anatomy and Parks and Rec all returned to lower ratings. The Crazy Ones debuted high, though.

-Meanwhile, even the promos for Parenthood make me weepy.

–Miley Cyrus wants us all to know that she loves weed and hates cocaine. Um, thanks?

–Zac Efron is thanking fans for their post-rehab support.

–Michael B. Jordan might be starring in the sequel to Independence Day, which means taking Bill Simmons’ advice to star in a big alien movie. Does this mean that next he’ll be in a fake celebrity relationship?

-Our second to the last podcast about Breaking Bad has dropped. *sob*

–John Krasinski still remains the lip-sync champion of the world, but Joseph Gordon-Levitt turned in a decent performance on last night’s Fallon. Here he is doing “Tiny Dancer” and “Super Bass.”

-Also, Joseph says he has a girlfriend. Um, ok.

-Jimmy Fallon also teamed up with Justin Timberlake (again!) to show us how dumb we sound when we talk in hashtags.

–Miley Cyrus is actually wearing clothes on the cover of Fashion. Baby steps!

–Deadmau5 took Pharrell Williams to Tim Hortons when he was in town last weekend — and videotaped it.

-The National Enquirer has reportedly obtained a shot of Zac Efron collapsed in a NYC hotel room on January 3rd after an overdose Oxy — because taking photos instead of calling 911 was totally the right thing to do at that moment.

-Speaking of drug use from squeaky clean stars, Melissa Joan Hart’s new book details her drug-fueled past and Hollywood hookups.

–Richard Gere and his wife of 11 years, Carey Lowell, are calling it quits.

–Rosie Huntington-Whiteley and Jason Statham were spotted strolling in Paris, putting and end to those split rumours.

-Despite my love and admiration for all things Joss Whedon, I wasn’t blown away by last night’s premiere of Marvel’s Agents of S.H.I.E.L.D. It didn’t matter, though; it killed in the ratings.

–Chris Brown and Drake have buried the hatchet — for today, at least.

-Remember that huge maple syrup heist that went down in Quebec a few years ago? Jason Segel is turning our national tragedy into a comedy.

-It was Alexander Skarsgard‘s idea to go full monty in the True Blood season finale.

-This wasn’t hard to see coming but it still deserves some serious eyerolls: Blake Lively is starting her own GOOP-ish company.

–Kanye West is frustrated that no one will give him financial backing to start a clothing line. No one change that, mmm-kay?

-The thought of Madonna covering an Elliott Smith song makes my stomach hurt.

-Meanwhile, Sean Penn and Madonna were spotted partying together in NYC. How crazy would it be if they reunited?

–Lamar Odom surprised everyone (especially his wife, Khloe Kardashian) by tweeting something nice about her.

–This clip of Emilie Hirsch and Holliday Grainger in a new Bonnie & Clyde TV movie makes me think this movie must only be watched while playing a drinking game.

-My love for Aaron Paul is very well documented, but I just don’t know if I can get behind this Need for Speed trailer. (Though I’m still jealous of Imogen Poots for costarring in not one, but two movies with him.)