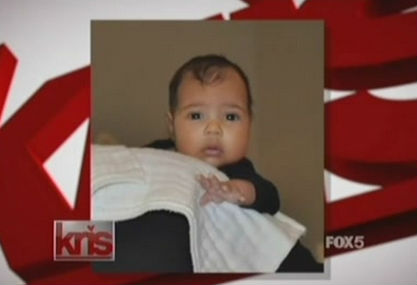 -Alright, Kanye West, I’ll give it to you. Your baby is pretty damn cute.

-In other baby news, William and Kate are starting to send out thank-you notes for their baby gifts. Adorabs!

-Paging George Clooney! Eva Longoria broke up with her boyfriend.

-Well, this isn’t a good sign: even People magazine is getting in on the Khloe and Lamar split rumours.

–Joey Fatone is denying an ‘NSYNC reunion will take place at Sunday’s VMAs. You can’t trick us, Joey! This thing is happening, if only by sheer public will.

-It looks like Alec Baldwin is just days away from becoming a new dad.

-I don’t hate Taylor Swift, but this takedown of “We Are Never Ever Getting Back Together” is brilliant. Especially the part where he talks about her relationships with John Mayer and Jake Gyllenhaal. (“What are you people doing? You. Are. Adults. Do you know what a 21-year-old is like? They’re essentially mentally disabled.”)

-The Black Keys’ Dan Auerbach lost a whole lot in his divorce settlement, including $5 million, a house, and a lock of Bob Dylan‘s hair.

–Ben Stiller is set revive Reality Bites as a comedy series for NBC. Anyone else think this is a terrible idea? I saw it on TV recently and man, that film does not age well. When I saw it when as a teenager, I thought Troy was a dreamy outcast. Now he comes off as an arrogant prig.

-I love and adore Robert Sheenan from Misfits, but I just can’t sign off on these flip-flops.

-Speaking of YA adaptations, the very first Divergent teaser trailer is here. It’s hard to judge from such a short peek, but I’m optimistic.