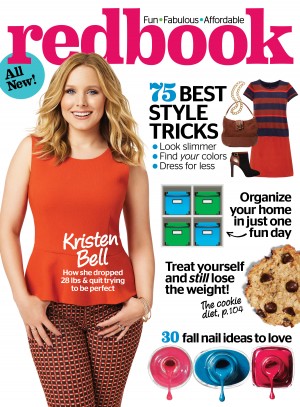 -What’s happening right now? Everyone’s making a big deal about how Kristen Bell is showing off her baby weight on the new cover of Redbook. I don’t see it. She looks Kristen Bell-shaped.

–Riley Keough (who was reportedly getting cosy with Robert Pattinson) may have reconciled with ex-fiance Alex Pettyfer. Downgrade.

-Speaking of guys who have a reputation of being jerkfaces, if you turn down Dominic Monaghan, he’ll text you crap like this.

-Sad: Bachelor and Bachelor Pad contestant Gia Allemand has passed away after an apparent suicide  attempt.

-Ooh boy. Lionsgate is making a Life After Life movie. I dunno; everyone lost their poo over that book, but it was tough-going for me.  And I can’t imagine how they’ll make it work for film.

-I don’t think I’d be able to make it past the first commercial break when playing this Gilmore Girls’ drinking game.

-Also, watch Paul Rudd get quizzed about Prince for no apparent reason.

-I have very little interest in seeing Mortal Instruments (despite my love of all things YA), but I’m impressed that the author made sure story passed the Bechdel test.

–Justin Bieber gave money to a homeless woman (good), posted a picture of it on Instagram (yuck).

-There’s a lot of think-pieces floating around today wondering how the hell Breaking Bad managed to double its ratings in its last season since, as this Time article points out, “It may be too sweeping a statement to say this never happens, but: this never happens.”

-Meanwhile, creator Vince Gilligan revealed in a new podcast that the teen they dedicated the last episode to (who recently died of cancer) turned down his offer to hear how Breaking Bad ends.

–Aaron Paul did an AMA last night, and it was great. Also great: this video of him calling random tweeters “bitch.”

-In other late night news, Chloë Grace Moretz showed off her skills with a butterfly knife.  She and Chris Colfer should have a duel!

-If you’ve been reading this blog for a while, you’ll notice that I rarely link to photos of celebrity kids, and when I ran Dose I had a rule that we wouldn’t post kid photos (unless they were posing on a red carpet or something). I’m super supportive of any law that limits the paparazzi’s ability to take snaps of children, because their parents made the decision to be famous, not them. Still, I really wish that the stars who were testifying in support of this issue were someone other than Jennifer Garner and Halle Berry, because I’m not sure either of them have a clean history with the paps. Imagine how much more powerful if this was coming from someone like, say, Sandra Bullock and Tina Fey?

–Rhys Ifans is joining Philip Seymour Hoffman‘s Showtime pilot, which makes me never, ever want to watch that show.

-The cast of Pitch Perfect is recording a holiday album. Aca-awesome!

-No wonder Cher is so mad about the leak of her duet with Lady Gaga. I wouldn’t want this out in the world either.

–Cocoa Rocha‘s new pixie cut makes me wanna cut all my hair off. Must. Resist. Urge.

-Today’s funny: this gallery on the 16 Oddly Specific Types Of Guy Drake Is, According To Twitter.

-The trailer for McCanick, one of two Cory Monteith films premiering at TIFF, has landed.