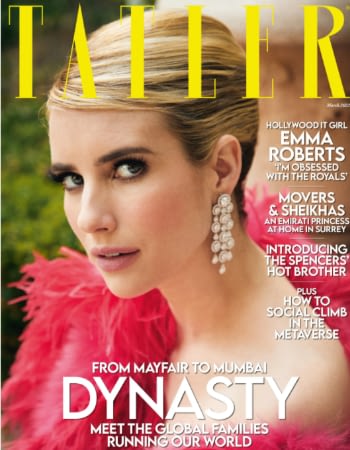 –Emma Roberts opened up about finding herself amid news of her split from Garrett Hedlund in her Tatler cover story. While she declined to comment on the specifics of their relationship, she said, “I’m at a place where I can say, ‘I may not have got everything right but I like who I am more than I ever have.’ My life has changed more in the past two years than it did in the 28 years beforehand and I love where I’m standing now at the age of 30.” She also talked about the paparazzi harassing her. “The way I was followed and treated when I was pregnant was disgusting. I’d be driving to a doctor’s appointment and they’d be following me so closely. At one point, I remember saying to them, ‘Please don’t do that, I’m eight months pregnant.’ But they don’t care.”

–Sean Penn recently told a newspaper: “I am in the club that believes that men in American culture have become wildly feminised. I don’t think being a brute or having insensitivity or disrespect for women is anything to do with masculinity, or ever did. I don’t think that [in order] to be fair to women, we should become them.” When asked to clarify his remarks by a different newspaper, he doubled down: “I think that men have, in my view, become quite feminised. I have these very strong women in my life who do not take masculinity as a sign of oppression toward them. There are a lot of, I think, cowardly genes that lead to people surrendering their jeans and putting on a skirt.” If it were anybody else I’d be surprised by such a blatant display of toxic masculinity. But him? Sounds about right.

-On the opposite end of the spectrum, Jamie Dornan was on Ellen and talked about having three daughters. He cheerfully said, “I’ve gone from my sisters dressing me up in like wigs and lipstick and stuff to my kids doing the same thing. I’ve basically been in a perpetual state of drag for 39 years.”

–This clip of Lady Gaga talking about all the acting courses/methods she follows and Salma Hayek quietly dying inside is hilarious.

-Meanwhile, here’s  a round-up of the most chaotic spectacles of Lady Gaga’s press tour. Everyone’s making fun of her but I love how extra she is. You do you, lady.

-Today’s Actors on Actors is Benedict Cumberbatch and Penelope Cruz.

-The Fleishman Is In Trouble continues to pick up great cast members. Adam Brody just joined the show.

–Ezra Miller posted a video to social media in which the actor appears to threaten members of a Ku Klux Klan chapter in North Carolina.

-And Just Like That star Cynthia Nixon is sticking up for Miranda’s treatment of Steve.

-To All the Boys I’ve Loved Before star Lana Condor is engaged to her longtime boyfriend, actor and musician Anthony De La Torre. I love that her ring is from a Canadian jeweler.

-This is an interesting look at how the explosion of international members in the Academy has made the Oscars harder to predict — but also non-English-language films are more viable than ever before.

–Jason Momoa has joined the Fast and the Furious franchise. He’ll be in F10.

–Olivia Munn and Henry Golding had a playdate with their kids. (And yes, John Mulaney was in the picture.)

–Tom Holland does the video game adaptation thing in the final trailer for Uncharted.

Fergie and Josh Duhamel Split After 8 years of Marriage