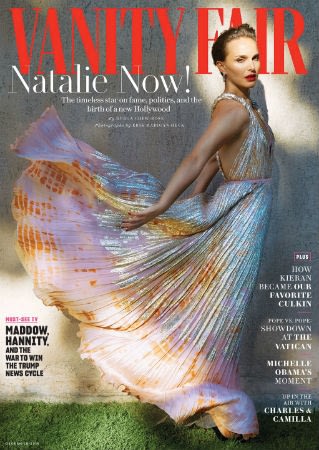 -In her new Vanity Fair cover story, Natalie Portman talks about being involved in the #MeToo movement, looking back on her experience with Harvey Weinstein and the former costars who’ve accused him of misconduct (“Like the set of Beautiful Girls—every woman in that movie has come forward”), and how upset she is to have been part of the Manic Pixie Dream Girl wave.

–Rami Malek thinks that viral video of him with a fan is “not that bad” — and I agree. We can’t just see actors in the wild and expect them to perform on cue like dancing monkeys.

-This look at how many chances Bryan Singer got with the Bohemian Rhapsody film is quite eye-opening. Oh, to be a white dude in Hollywood. (In response to the article, Singer released a statement to THR: “Any discussion about fights between myself and Rami Malek are simply an exaggeration of a few creative differences that were quickly resolved. This is normal on a film set. And I think the work speaks for itself.”)

-As interesting as this take is on Nicki Minaj and Cardi B‘s social media war is, I’m still exhausted by the whole thing.

-Netflix got the original cast of Sabrina the Teenage Witch to watch the new reboot and give their reactions, and it’s very funny. “I wasn’t allowed to take my clothes off!”

–Jesse L Martin is taking a leave of absence from The Flash this season due to a back injury he sustained during the summer hiatus. I figured something was up — in every scene so far this season he’s been conspicuously sitting down or leaning on something.

–Louis C.K.’s latest standup show was met with a handful of protesters. During the show, the comedian said “They tell you that when you get in trouble you find out who your real friends are. It’s black people, it turns out. They’ll stick by you,” invoking a group of people whose allyship he seems to value, if not reciprocate.

-Hollywood stuntpeople say that the past several years have brought about a troubling change when it comes to safety, likely due to the huge increase in streaming content, which has led some productions and stunt coordinators to cut corners.

-I’m very curious to know how much control Barbra Streisand had over her Carpool Karaoke segment. I’m guessing A LOT.

-The director of Blue Is the Warmest Color has been accused of sexual assault in France. That film’s TIFF premiere was the most awkward screening I’d ever been to because the lead actresses refused to be on the stage at the same time as him (they said at the time they way he filmed sex scenes made them feel “like prostitutes”), so for the film’s intro he came out first, said his bit, and then left the stage so the actresses could come out.

-The Kiss Quotient is being adapted into a film, which I’m very excited about but also very curious how they’re going to do it because that book was *steamy*.

–Sara Bareilles performs a soulful version of ‘Theodosia Reprise‘ for the latest Hamildrop and I’m not crying YOU’RE crying!

–Rebel Wilson get meta in the rom-com spoof Isn’t It Romantic. I love everything about this trailer.