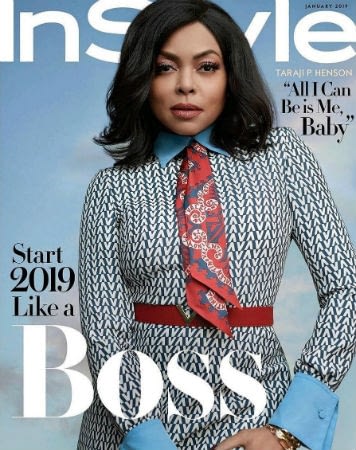 –Taraji P. Henson looks amazing on the cover of InStyle. (The subscribers’ cover is even better.) In the interview, she says execs tried to convince her that she wouldn’t do well internationally: “Hollywood executives would tell me that I don’t have fans all the way over there… Then we go to Paris, and it’s standing room only in a room with 1,500 seats. I cried…You can’t let people tell you shit.” (I really wish they would have asked her about whatever the hell happened to torpedo the marketing campaign for Proud Mary. That movie was inexplicably, unforgivably, intentionally buried.)

-New court documents revealed that Kesha and Lady Gaga exchanged text messages about how “mean” Katy Perry was being. Gaga then took to Twitter to explain: “These are old texts. We’ve matured, gotten over the past, love each other & share deep respect. Katy is my friend and is truly a kind soul. End of story.”

–Ariana Grande pays homage to Mean Girls, Legally Blonde, 13 Going on 30, and Bring It On in her new video for “thank u, next.” (Bless Mark Ruffalo for saying he’s celebrating with Razzles.)

-On Watch What Happens Live, Megan Fox admitted to hooking up with Transformers costar Shia LaBeouf.

-People who weren’t paying attention seemed surprised that Netflix cancelled Daredevil, but seeing what happened with Luke Cage and Iron Fist, it’s clear they’re getting out of the Marvel business. Everyone is expecting the new seasons of Jessica Jones and Punisher will be their last. Don’t expect them to move over to Disney’s new streaming service, either. And even if Marvel is hinting that we’ll still see more Daredevil in the future, it’s likely it will be a whole new take.

–Jennifer Garner toasted Bradley Cooper by reminding him of all his middling TV appearances — including on Alias. (“It wasn’t until I heard him speaking French to a background artist on set one day that I went ‘wait a minute, is Bradley handsome?!'”)

-I love that Grownish is recreating the title credits from A Different World.

–Connie Britton is on a new TV show that’s doing well, and I don’t have time to watch it. That’s where we are in this era of peak TV.

-Is Prince Charles‘ birthday the real reason behind all the negative stories coming out about Prince Harry and Prince William lately?

–Cardi B and Nicki Minaj are still at it.

-I really want to see The Favourite, but calling it a prequel to Phantom Thread does not to it any favours if you ask me.

–Roma will be streaming on Netflix soon, but if you’re in one of the few cities where it’s getting a theatrical release, you should see it on the big screen. Critics are falling over themselves to praise this one. 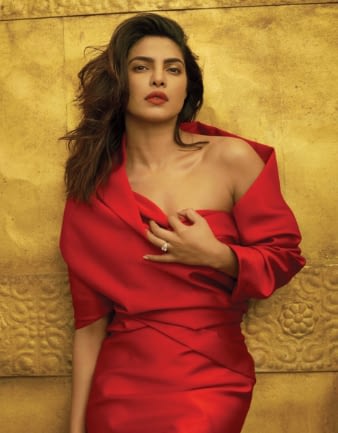 -It’s a big week for Priyanka Chopra. Not only is she getting married in two days, but she also landed on the new cover of Vogue (marking the first Indian woman to be on Vogue America’s cover). In the joint interview with Nick Jonas, she talks about how their first date was “too respectful” (“We hung out for a couple of hours. He patted my back before he left”) and talks about letting the public in on relationship details (“I’ve had that rule my whole life: Never publicly acknowledge a relationship. Ever. What is happening? I’ve not known myself like this. This guy turned me into such a girl! If I could blush, I’d be tomato red right now”).

-EW released their Entertainers of the Year covers, which included covers featuring the Crazy Rich Asians and Black Panther ladies, as well as Cardi B and Darren Criss. They also released video interviews with some of their entertainers. Great job, Baranski!

-The girl who posted the Michael B Jordan faked missed connection ended up going to the Creed 2 premiere, and MBJ even tweeted about it. She’s now my hero.

–Rachel McAdams has stayed pretty mum about her new baby, but in a new interview with the Sunday Times she confirmed that she had a baby boy back in April: “I’m having more fun being a mom than I’ve ever had. Everything about it is interesting and exciting and inspiring to me. Even the tough days, there’s something delightful about them.”

-In a new interview, Kate Beckinsale says she is open to the idea of more kids: “I definitely would [consider more children], but then I think, Oh God, I annihilated my 20s and I suddenly get a taste of freedom and annihilate myself again? But I am open to seeing what happens.”

-In more baby talk, Hailey Baldwin graces Vogue Arabia’s two December covers, and talks about wanting kids with hubby Justin Bieber. “I love kids and I can’t wait to have my own.I would say now that’s a closer reality.”

-Jesus H Murphy, did People really just run a sympathetic feature on Matt Lauer and how he’s coping with the fallout of his sexual harassment allegations. How HE’S coping?!?

-This is a great reminder from GQ that bad men don’t need a comeback.

-A woman who attended one of Aziz Ansari‘s recent shows in Toronto (there were two because the first show sold out, smh) described a conflicted audience.

-This is a great, great thread by Mo Ryan about all the #MeToo fallout at CBS over the last year — and how little action has been taken.

-And here I thought peak TV was a problem — now we have peak movies. The first wave of awards gave top prizes to The Rider and First Reformed (starring Ethan Hawke): two Oscar contenders I’ve never even heard of.

-Do you think Mariah Carey’s kids will one day view “All I Want for Christmas” the same way Hugh Grant’s character in About a Boy views his dad’s holiday jingle?

–Hugh Grant recalls all the horrible things he’s done onscreen to frequent costar Ben Whishaw:”I want him dead…I put him in prison. I tried to kill him on a train. I seduced him, and tried to have him murdered. He’s been very nice about it.”

–Protect Mr. Feeny at all costs.

–Miley Cyrus and Liam Hemsworth lost their home to a California wildfire, but they’ve still donated $500,000 as they set their sights on rebuilding not just their house, but also their community.

-This Luther trailer is everything! The serial killer looks impressively creepy, and I actually squealed at the blink-and-you’ll-miss-it glimpse of Ruth Wilson‘s Alice at the end.

-Even if you assume that 97% of everything printed about the royal family is made up, the palace seems to be experiencing a bit of a leak problem lately, no? A new report from People suggests Prince Harry is feeling “imprisoned” at Kensington Palace, while another suggests that he is angry at Prince William for not “making an effort” with Meghan.

-Does anyone actually believe that Leo DiCaprio is getting ready to propose to his 21-year-old girlfriend? Anyone? Bueller?

-The NYT published a devastating new exposé about Leslie Moonves that includes text messages exchanged by him and a talent agent about allegedly hiding an incident of sexual assault against an actress — and it could put his $120 million package from CBS in jeopardy.

-The Good Place’s Jameela Jamil got into it with Cardi B about celebrity diet scams.

–Justin Bieber and Hailey Baldwin are reportedly living in Waterloo, ON fulltime now because they get a break from the paps and fans. A source tells People, “It’s very peaceful. He can take Hailey out and it’s not a mess with photographers. They are much more left alone.”

-Praise be! Margaret Atwood is writing a sequel to The Handmaid’s Tale.

–Rachel Weisz brought cutouts of her costars’ heads to Gotham Awards. Does this mean it’s cool to carry around life-size cutouts of Olivia Colman? ‘Cause I’m already doing that.

–Lindsay Lohan is mad about Ariana Grande‘s “thank u, next” music video, which pays homage to Mean Girls but doesn’t feature her in a cameo.

-All of the recent Kristen Stewart movies I’ve seen have been weird, art house films (Jeremiah Terminator LeRoy, Personal Shopper, Clouds of Sils Maria) but she’s been on a bit of a big studio movie deal spree lately.

-I don’t think I could pick Kourtney Kardashian out of a lineup, but still good on her 39-year-old self for dating a 21-year-old.

–Keira Knightley has an affair with Alexander Skarsgård in post-World War II Germany in The Aftermath trailer.