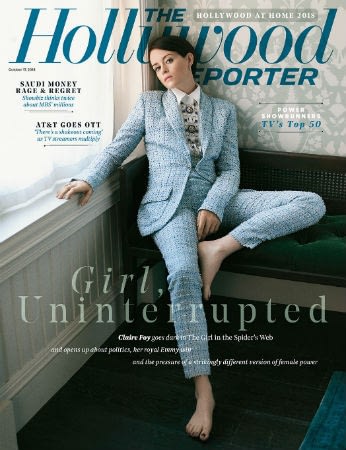 –Claire Foy is everywhere these days. She’s promoting both First Man and the Girl with the Dragon Tattoo sequel, which has landed her on the covers of Vogue, Porter Magazine, and The Hollywood Reporter (my fave look).

-A Taffy Brodesser-Akner profile is always worth your time. In her latest, she interviews Melissa McCarthy while indoor skydiving.

–Lady Gaga‘s explanation of why she wore menswear-inspired look to the Elle Women in Film Awards last night is pretty damn powerful.

-Also at the Elle event, Shonda Rhimes revealed that she’s the highest paid showrunner in television — and that she allowed the press to under-report her deal with Netflix. “When Ryan [Murphy] made his amazing deal with Netflix, what did he do? He shouted his salary to the world and he did this gorgeous cover shoot and photo for The Hollywood Reporter and he deserved every minute of it. I applaud him. When I made a deal with Netflix, I let them interview my salary wrong in the press, and then I did as few interviews as possible and I put my head down and worked. In other words, I hid.”

-At her tribute to Sarah Paulson at the Elle event, Sandra Bullock revealed that her dad and her two dogs all died within the last few weeks.

-Twist! After Drake discussed feeling betrayed that Kanye West told Pusha T about his secret son, Pusha said he actually found out about it from Drake’s producer and BFF Noah “40” Shebib.

-Netflix announced that the next season of Orange Is the New Black will be its last.

-I really need to see this video of a little boy stroking Prince Harry’s beard today.

-It’s only Wednesday, but this definitely takes the cake for the weirdest headline of the week: A Riverdale actor denies conspiring with Courtney Love to murder Frances Bean‘s ex-husband.

-Blumhouse has never made a horror movie with a female director, so a reporter asked Jason Blum why. His response leaves a lot to be desired.

–Busy Phillips‘ new book comes out this week and it sounds deliciously dishy. (I’m just going to pretend I didn’t read the part about Joshua Jackson being a mansplainer...)

-Speaking of Joshua Jackson, now that pot is legal in Canada everyone on my Twitter TL is sharing this clip of Jackson and Gord Downie getting high in One Week. I LOVED that movie!

-I’ve seen both of the movies that Nicole Kidman is getting Oscar buzz for (Boy Erased and Destroyer), but Destroyer is the one that’s stayed with me longest. The way she changes how she moves in the flashbacks with Sebastian Stan versus the present day storyline as a bitter cop is phenomenal.