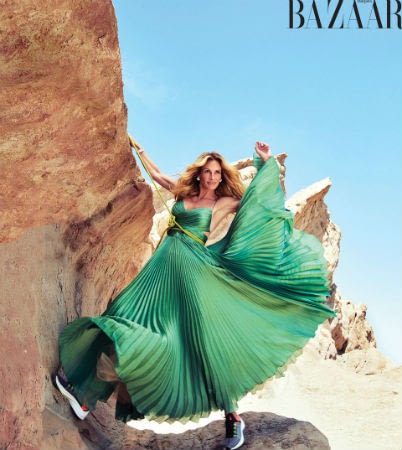 -In the latest issue of Harper’s Bazaar, Oprah chats with Julia Roberts, who talks about her kids coming to the realization that she’s not your average mom (‘Are you more famous than Taylor Swift?’), grapples with her feelings about Instagram (“One weekend morning [my niece] Emma [Roberts] slept over, and we got up and were having tea and playing cards and having this beautiful morning, and then a couple of days later she posted a picture of us. And the number of people who felt absolutely required to talk about how terrible I looked in the picture — that I’m not aging well, that I look like a man, why would she even post a picture like this when I look that terrible! And I was amazed at how that made me feel”), and reveals how she celebrated her 50th with her husband (“I said, ‘How about this? We have five days away with zero contact with the outside world.’ That was 50, and it was so beautiful and wonderful. It was just the two of us, and there was a point where I thought, ‘Gosh, this is kind of weird.'”).

–George Clooney presented an award to Emma Gonzalez at Variety’s Power of Women ceremony, saying “These are trying times, and trying times create inspirational leaders.” (Also, bless him for introducing himself as “Amal Clooney’s husband”.)

-There were lots of great speeches at the ceremony. Natalie Portman outlined what women in Hollywood can do: “Gossip well. Stop the rhetoric that a woman is crazy or difficult. If a man says to you that a woman is crazy or difficult, ask him: what bad thing did you do to her?” Tiffany Haddish advised to “be yourself and don’t try to be something that you’re not, because that’s when you become a bitter-ass bitch.”

–Princess Eugenie got married today and her open-back wedding dress was lovely, but Cara Delevingne stole the show by showing up in a top hat and tails.

–Neil Patrick Harris was on The View this week and had a very strange exchange with Whoopi Goldberg about sex. You ok, Doogie?

-This review of the soundtrack to A Star Is Born by someone who hasn’t seen the movie yet made me laugh out loud repeatedly. There were so many good bits, but this might be my fave: “This track was when I fully realized that, to borrow parlance from Vulture associate editor and top-five favorite Twitter user Hunter Harris, I wanted Bradley Cooper to [redacted] me by the [redacted] and [redacted] my [redacted] until we [redacted] at the same time because it seems like that would be possible with him.”

–Ryan Adams has apologized for those butthurt tweets about Mandy Moore. “I apologize for my remarks. I was trying to be funny. But I have and will always choose to remember the amazing moments.”

-This is an interesting look at exactly how many men’s lives have been “ruined” since #MeToo started a year ago this week. (Spoiler alert: not many.)

–Shiri Appleby is out here reuniting with all her old costars. Last week it was her Life Unexpected crew, this week Roswell.

-Marvel has fired Chuck Wendig and I don’t really know a lot about the comics world but my Twitter feed is NOT HAVING IT.

-Terrible: a crewmember on Sony’s Mr. Rogers pic died after a fall on set.

-This Johnny Depp press tour continues to be horrible. He’s not going to have any axes left to grind after this…

–Chris Hemsworth talks about being uneasy with his wealth in the new issue of GQ: “I feel gross about it. I remember saving up for a surfboard when I was younger. The surfboard was 600 bucks and I saved up for a whole year with Dad’s help. I didn’t even want to surf on it for fear of damaging it. It taught me so many lessons about appreciation and working hard for something. When I think about my kids, I don’t want them to miss that joy. Elsa and I talk a lot about how we instill that same appreciation and respect for things.”

-I’m bummed that All American tanked in the ratings. On the plus side, it’s on the CW and they don’t seem to care about pesky little details like that…

-Here’s the first Aladdin teaser. I was hoping for a glimpse of Will Smith as the genie, but at least we get confirmation that Mena Massoud‘s Aladdin is hot.