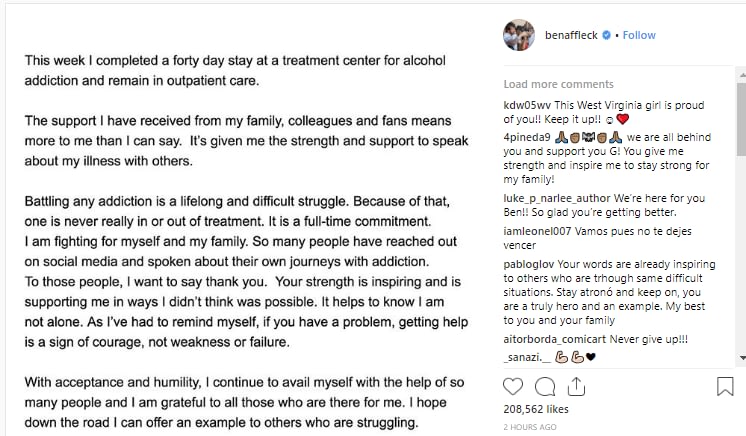 –Ben Affleck has completed a 40-day rehab stint and released a statement on Instagram, saying “It is a full-time commitment. I am fighting for myself and my family.”

-Did Chris Evans just announce on Twitter that he’s done with the Avengers forever?

–Ryan Gosling was very charming on Kimmel, talking about how the women at his mother’s wedding weren’t interested in his celebrity status, they just wanted to tell him about all the secret food stashes at the venue (“There was a lot of, during the service, like these wonderful older Italian women just whispering to me about food. At one point, this one woman said, ‘There’s a tortellini in the freezer!’ Then later on, almost towards the vows, another woman said, ‘There’s a smoked mozzarella in the fridge.’ And then another woman went, ‘It’s from Naples'”) and how his role in First Man has confused his kids (“I think they think I’m an astronaut now. My oldest said the other day, she pointed to the moon. She was like, ‘That’s where you work, right?'”)

-When TMZ’s Harvey Levin is the one trying to talk some sense into Kanye West, you know we’re in trouble.

-This feature on The Good Place is so, so good.

–Amy Schumer and Emily Ratajkowski were among the many arrested at today’s Kavanaugh protest.

-The box office buzz this weekend will be taken up by Venom and A Star Is Born, but don’t sleep on The Hate U Give, which is at 95% fresh on Rotten Tomatoes.

–Michelle Williams talked about bringing her feminist sensibilities to her role in Venom: “A lot of the work I did was figuring out ways to sneak that in. Nobody’s going to go see this movie because of the social import or relationship details. And I don’t mean to get boring or didactic about that. I just mean it;ll be nice if we can do some of this gender play. Anne gets to play with some masculine qualities and Eddie gets to play with some feminine qualities, just little things like bringing that out in the wardrobe…She’s the one in the tie, and he’s the one taking the tie off.”

-I loved this piece on how reluctant, bro-tastic movie star Bradley Cooper has begun the auteur phase of his career.

-Meanwhile, the more cover stories I read with Lady Gaga, the less I feel I know anything about her.

-The Hollywood Foreign Press Association has launched an investigation into that weird Drew Barrymore interview. How strange would it be if this is the thing that takes the Golden Globes down?

–Rita Moreno‘s video tribute to Gina Rodriguez made me a little teary.

–Clint Eastwood is a cocaine runner and Bradley Cooper and Michael Pena are on his tail in the first trailer for The Mule.