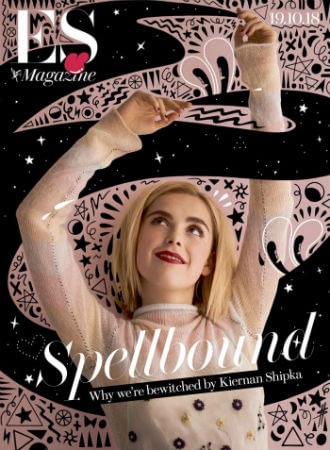 -The Chilling Adventures of Sabrina drops Friday on Netflix, and I appreciate all the looks Kiernan Shipka is serving up on the promo tour.  Her premiere dress was appropriately witchy, and she’s very cute on the cover of ES Magazine.

-I’m not quite sure why Sarah Silverman felt the need to tell everyone that Louis C.K. masturbated in front of her with consent when they were kids. I think she’s trying to explain that because he grew up thinking that kind of behavior was accepted, he didn’t understand why it wasn’t when he became famous.  (“I’m just saying at a certain point, when he became influential, not even famous, but influential in the world of comedy, it changes. He felt like he was the same person, but the dynamic was different and it was not okay.”) But it was never ok. On the plus side, at least she doesn’t seem down with his sweep-it-under-the-rug comeback. “I’m not saying everyone should embrace Louis again. I believe he has remorse. I just want him to talk about it on stage.”

-The plot thickens in the feud between Cardi B and makeup artist Blacswan.

-On the Today Show, Nicole Kidman clarified her comments from last week about how being married to Tom Cruise protected her from sexual harassment. “Because I was married at 23 years old, I wasn’t going to parties or I wasn’t going out a lot. I had my first child at 25 and I was in a family. So my sense of being in the world was — I was working, or I was at home.”

–Drake reportedly wanted to have kids with Rihanna. I mean, who doesn’t?

-Good on Liam Payne for calling out a tabloid story on the “mystery woman” he was photographed with: “My team is full of talented, smart professional women. I find it wrong that they are reduced to being linked to me romantically in the press just for simply standing next to me.”

–Chris Hemsworth and his brother picked up a hitchhiker and took him where he needed to go — on a helicopter.

–Ariana Grande and Pete Davidson reportedly hadn’t started any wedding planning yet, so that has to make things slightly less terrible for them.

-Meanwhile, Davidson incorporated the split into an awkward standup set: “I’ve been covering a bunch of tattoos, that’s fun. I’m f–king 0-for-2 in the tattoo department. Yeah, I’m afraid to get my mom tattooed on me because she’d leave.”

–Jill Soloway and Hannah Gadsby are reportedly dating and I love this so much!

-Nashville costars Chris Carmack and Erin Slaver got married over the weekend.

-I don’t typically watch Doctor Who but I might catch up on last night’s episode about Rosa Parks because everyone is gushing over it. It was the first episode in the show’s 55-year history written by a person of colour.

–Cate Blanchett is getting a lot of flak for defending straight actors playing gay characters. While I think she should have acknowledged the privilege she has to take her pick from a vast number of roles that non-straight, non-white actors would never even be considered for (and the value of those who can bring lived experience to a role) I also think she’s been a bit misquoted. She actually said, “I will fight to the death for the right to suspend disbelief and play roles beyond my experience.” Which is…acting.

–Selma Blair revealed her MS diagnosis and got a lot of support from fellow celebs.

–Will Smith appeared on Jada Pinkett Smith‘s Facebook talk show, where he get candid about a rough time in their marriage: “Jada’s an actress, she had two babies, she had to be home raising her babies while I got to do everything I wanted to do. She was sacrificing herself to fit my picture. I felt that money and winning made a good relationship. You [Jada] were trapped in a life that you didn’t build and you didn’t want.”

-Every time Dave Grohl invites a kid on stage it makes my heart sing.

-Here’s the latest trailer for Julia Roberts‘ Amazon show Homecoming, which I just realized costars Lip from Shameless AND Ray from Girls.  The reviews are pretty glowing.