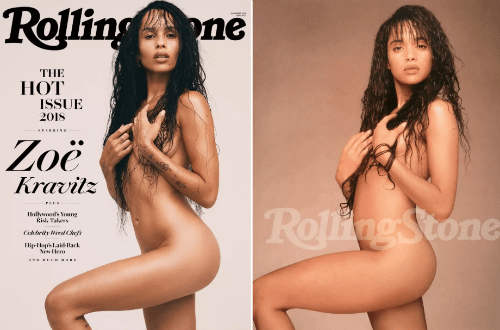 –Zoe Kravitz recreated her mother’s famous nude pose 30 years later on the cover of Rolling Stone. In the interview, she reveals she’s engaged to actor Karl Glusman, talks about working with a director who made her “uncomfortable,” and remembers how growing up in Lenny Kravitz‘s house meant she’d wake up to Ashton Kutcher making omelets in their kitchen and Nicole Kidman wanting to take her to the movies.

–Busy Phillips’ talk show debuted last night, and she got Mindy Kaling to admit she was texting Oprah during labour.

–Justin Bieber‘s burrito photo was a hoax? Ya don’t say!

-Wow, I have not watched The View in a minute, but Joy Behar has no time for Meghan McCain and I love it.

–Lena Dunham is set to adapt a Syrian refugee story for JJ Abrams and Steven Spielberg. Yeah, what could possibly go wrong there?

–Colton Haynes filed for divorce from his new husband in May, but last week he posted about celebrating their first anniversary, so they’ve clearly reconciled. I’m so glad for him; I’m weirdly invested in this kid’s happiness.

-I am way, way too wimpy to watch horror, but I was sick this weekend and got totally sucked into Netflix’s The Haunting of Hill House. The family drama is hard to resist. Someone described it as “This Is Us with jump scares” which is pretty damn accurate. And it’s shockingly well-made. Episode six is basically two 20-minute one shots that are breathtaking.

-The Heathers show is truly cursed.

–50 Cent bought a bunch of seats to a Ja Rule concert — just so they would be empty. I aspire to this level of pettiness.

-Another great #MeToo expose by Amy Kaufman, this one about an actress who was assaulted this year and did all the right things when it came to reporting it – but nothing happened.

-Meanwhile, Cardi B went on a rant about trolls in her comments: “If you’re under comments talking sh*t, y’all need to motherf*cking cut your veins.”

–Darren Criss and Lea Michele singing “Shallow” really hit me in the feels.

-In case you need a reminder, this thread recaps why Chris Pratt should not be anyone’s top Chris.

-The red band trailer for Nobody’s Fool made me laugh. I don’t care. I need this.